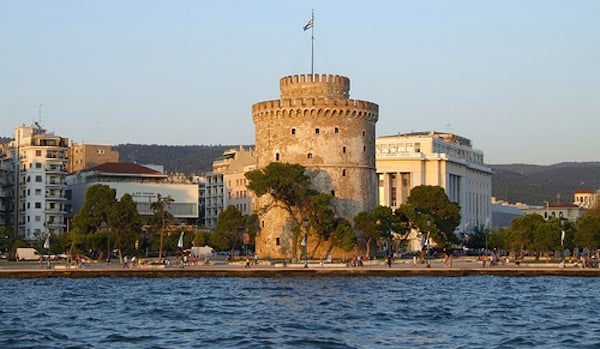 In a recent survey held in Thessaloniki – Greece’s second-largest city with its 400,000 inhabitants – seven out of 10 interviewed responded that the White Tower with its unique silhouette is ”the symbol of the city.” Nine out of ten responded mistakenly that the tower ”used to be a prison,” apparently mistaking it for the also famous castle of Genti Koule, which rises a few kilometres away.
In fact the White Tower of Thessaloniki is one of the city’s most important monuments, dominating its large port. Originally it was a fortified tower built by the Ottomans in the 15th century.
Later it was used as frontier post by the Janissaries, and only after that it became a prison for persons sentenced to death. It was built on the ruins of a Byzantine tower that linked the western side of the stronghold of Thessaloniki, still standing today, to the one on the seaside, which was knocked down in 1866. It has six floors, a height of 30 metres and a perimeter of 70.
At first it was called Lions’ Tower, but later other names were given to the construction: in the 18th century it was called Kalamaria Fortress and during the 19th century Tower of the Janissaries or Kanli Kule (Bloody Tower in Turkish), because prisoners were tortured there. In 1890 a prisoner serving a life sentence painted the tower white in exchange for his freedom, since then it is named White Tower. The answers given by the interviewed to questions about the White Tower show that often people in Greece know little about the history of their most famous monuments.
The fact that the inhabitants of Thessaloniki don’t know about the Byzantine and Ottoman walls and castles of their city – despite the fact that they are on the list of protected UNESCO sites – is more understandable, because these sites have never been the object of real tourism promotion.
In order to change this lack of attention and put this forgotten part of the old city in the spotlights, the municipality of Thessaloniki has recently started to tear down many old decrepit houses that had been built against the back of the ancient wall, blocking its view.
These houses, hundreds of them, date back to the 1920s and were built in a rush to host the huge wave of Greek refugees returning from Turkey in 1923. Most of these houses were abandoned years ago.
They pose a public health threat but also a safety threat, because some of them have been occupied illegally by homeless people. To avoid promoting one part of the city at the expense of another, 12 of these houses that represent the best examples of architecture from that period will be restored.
Apart from the demolition project started by the municipality, the campaign to promote the city through the rediscovery of its cultural heritage also includes programmes to bring the public in contact with the city’s Byzantine and Ottoman past, and with the story of the large Jewish community that once flourished there. In Thessaloniki also stands the house (nowadays a museum) where Mustafa Kemal Ataturk, founder of modern Turkey, was born in 1881. The mayor of Thessaloniki, Yiannis Boutaris, has already visited Israel and Turkey to discuss the project to promote his city as tourist destination with the local authorities.