Billionaire, entrepreneur and actor Alki David, married model Jennifer Stano in New York last Saturday. The glamorous event was held in New York, where most of the bride’s friends and relatives live. 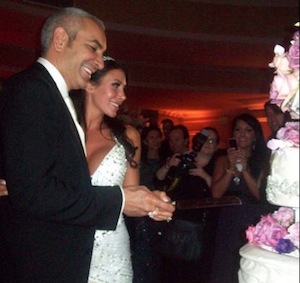 The wedding took place at Oheka Castle in Long Island. It is a huge gated manor that is also used as a hotel when not occupied by weddings or events. The couple rented out the entire place so their guests could stay the night. Joe Jonas, Joey Fatone and many other celebs have also held events at Oheka.

The ceremony was attended by 350 guests and seen by 167,203 virtual live attendees on Mr. David’s online community BattleCam.com as well as on Facebook.  Alki and Jennifer are an online phenomenon with a massive following, as the pair often appears live on Mr. David’s BattleCam.com online Web community site. The wedding was filmed by NBC/ Universal for an upcoming unscripted television series.

The wedding dress was from Kleinfields and the rings were from David Yourman. The bridesmaids wore pink long dresses.

Alkiviades “Alki” David is a Greek digital media entrepreneur and actor currently living in Beverly Hills, California. He also owns a big stake of his family’s fortune which includes 30 Coca-cola bottling plants in Europe and Africa. He is notable for his early adoption of social media as a marketing vehicle, such as his owned and operated sites FilmOn and Battlecam. He had also appeared on TV and in cinema as an actor.

The couple will Honeymoon in Greece.