Profile of Greeks in Libya 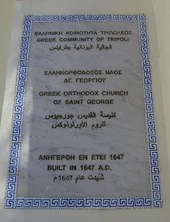 Greece has had a long and positive relationship with Libya, actually dating back as early as 700 BC when settlers from Crete settled on the northern coast of the country.  Greeks have had a presence mostly in Benghazi and Tripoli for generations. Benghazi where the majority of the Greek community resides, is only 400 km south of Crete. The Greek island of Crete is a short distance from Benghazi and many families in Benghazi today bear Cretan surnames. The Greek community is centered in the country’s two largest cities: around 500 reside in Tripoli and nearly 1,000 live in Benghazi.

The Greek community in Benghazi operates its own schools and also has its own small Greek Orthodox church found in the centre of the city.  It is dedicated to the Virgin Mary Evangelistria with one priest. It was founded in 1907-12. The Greek community in Tripoli also has one church of its own, as well as a priest. It is located in Tripoli’s old Medina, near the second century arch of Roman emperor Marcus Aurelius, and is dedicated to Saint George of the “Slaves”. It dates from the seventeen century and was founded in 1664 in an ex Ottoman prison building.
(source: noctos)