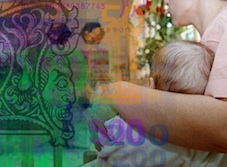 Bulgarian babies have been illegally sold in Greece, authorities reported, after cracking down a baby trafficking ring. Nine people have been arrested in Greece, three were Greeks and six were Bulgarians. Among the arrested is a medical doctor and a lawyer.
Investigations were carried out by  Greek and Bulgarian police starting last May.
The members of the criminal gang used to smuggle pregnant women, in their early 20′s, from Bulgarian to Greece, where they would give birth and then sell their children. Girls were sold at a price of 18,000-20,000 euros and boys for 25,000 euros. The mothers would receive € 2,000.
Authorities suspect the illegal baby trafficking ring is one of the biggest networks for selling children in Greece. It has been reportedly operating mainly in central Greece but also in Athens and Serres.