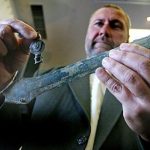 Archaeological excavations in the area of eastern Rodopi were found.  They include a stamp in the shape of a pyramid, like the stamps used by the officials of the Byzantine army. The stamp bear the figure of a lion, moving to the left. Such stamps were carried by Byzantine army officials, as a sign of recognition of their commission. The findings date from the 10th or 11th century and may belong to a military governor of the Byzantine army, who visited the area of Perperikon.
It also came to surface an agraffe dating from the 3rd or 4th century, with a unique technical construction. This special adornment has a circular shape.  It is made of copper and in its center there are pieces of white glass and twelve small stars, with twelve radiuses each.