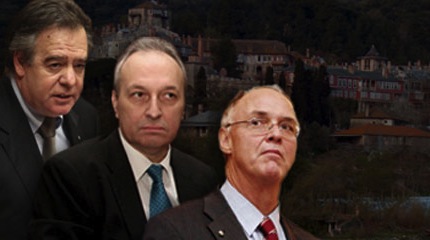 Today the Greek parliament decided to refer three former Ministers of the previous centre-right government to a special tribunal for violation of their institutional duties in relation to a Mount Athos real estate scandal. In a plenary session, the unicameral parliament instead absolved , following an all-night session, another centre-right former Minister of the same charges. All have three claimed they are innocent; former Agriculture Minister Evangelos Basiakos and his Deputy Minister Alexandros Kontos, along with former Deputy Finance Minister Petros Doukas. Absolved were former State Minister and government spokesman Costas Karamanlis, Theodoros Rousopoulos and former Merchant Navy Minister Giorgio Voulgarakis. The Mount Athos scandal which was an exchange of state owned land with others of less value belonging to the Vatopedi Monastery, played a part in weakening the centre-right government which was later defeated in the October 2009 general elections. Premier Costas Karamanlis had also been called upon to testify in the case.  He only sent a defensive memorandum.