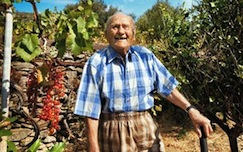 Dan Buettner* and his associates studied the way of life in areas known for the longevity of their natives, i.e. the percentage of locals who live up to the age of 100 is greater than in other areas around the world, combined with a low rate of hear diseases and cancer. These areas became the subject of his book: “The Blue Zones: Lessons for Living Longer from the People who Lived the Longest” (National Geographic). Among the “Blue Zones” are Sardinia, Okinawa, Costa Rica, Loma Linda, California and Ikaria. Despite the tremendous cultural and geographic differences between these distant lands, Buettner has identified common practices that seem to aid in extreme longevity. He calls these “The Power Nine,” or the nine rules any person can follow in the hopes of emulating the world’s longest-living humans.
“Grecian formula” for longevity
More specifically, Dan Buettner in a National Geographic article referring to the “Grecian formula” for longevity stated that “for the past eight years, I’ve led expeditions to regions I call Blue Zones, places around the world where people are living measurably longer. Contrary to popular opinion, genes dictate as little as 2 percent of our life expectancy, so studying the lifestyles in these spots offers clues as to what we can do to live better, longer. Since 2008, with funding from National Geographic and AARP, my team has been investigating the Greek island of Ikaría, some 35 miles off the coast of Turkey, where more than a third of the residents reach age 90. The locals here suffer 20 percent less cancer than Americans, half the rate of heart disease, and, most surprisingly, none of the dementia.”
The author continues that “Long-living Ikarians, we discovered, observe about 150 days of religious fasting a year, stay up past 2 a.m., sleep late, and nap. They eat mostly leafy greens, potatoes, and beans. All of these factors, by varying degrees, add years to life. But there is another shared trait, one we hadn’t seen in other Blue Zones.
Ikarians have an afternoon habit of picking fistfuls of garden herbs and steeping them in boiled water for an evening beverage; at breakfast, they drink tea from other dried herbs. This was an important lead. I immediately contacted pharmacologist Ioanna Chinou, Ph.D., at the University of Athens, who agreed to unleash her lab’s resources to help. I sent her several Ikarian herbs commonly used as teas: wild mint, spleenwort, rosemary, and purple sage.”
It is also important to note that, as the author points out, some Ikarian herbs can be hard to find outside of Greece, but other healthy herbs are readily available in the U.S.”
*Dan Buettne is a holder of three separate world Guiness World Records for distance biking: a 15,500-mile ride from Alaska to Argentina in 1987, when he was 27; a 12,888-mile journey across the Soviet Union in 1990; and a 12,172-mile jaunt through Africa completed in 1992, an American explorer from Minnesota, performed a study on longevity with his team of scientists, after a series of journeys worldwide, including the Greek island of Ikaria, first published in National Geographic.