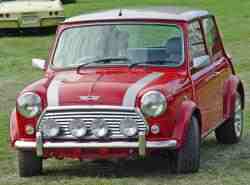 Four Greeks designed car models that are loved and they gave to car industries great amounts of money and fame. They created their own tendencies and they continue to win many women and men with their designs until now.
A great example is Alexandros Isigonis who designed the famous “Mini” that was very successful and it a legend until today.
Many other Greeks, like Andreas Zapatinas , Sotiris Kovos and Vicky Vlahakis followed his example in other car industries.
Alexandros Isigonis
As a child, he wasn’t a good student. But his intelligence and his diligence were obvious. He went in England in 1922. There, he bought his first car, a “Singer” who had many mechanical problems. That’s the reason why he studied mechanical engineering in London, but he left the studies because he wasn’t good at mathematics.
26 august 1959 was the great day for him, when he designed “Mini Classic” with his team, for British Motor Corporation. He became known and in 1967 he became member of the Royal Society of Britain. 2 years later, Queen Elizabeth nominated him “Sir”. He continued to work even after his retirement in 1971 and he died in 1988.
Andreas Zapatinas
Andreas Zapatinas was born in 1957 in Athens, he got a designer diploma in the USA and he started his career at Fiat. He started with the design of new models and he participated in the “Barchetta” creation. But the bad situation in the company made him find another job. Then, he accepted a proposition from BMW and he went to Munich. He made a great career in Germany and he had propositions from many Italian companies. So, he became director in Alfa Romeo’s “Centro Stile”.
He continued his career in Subaru’s Advansed Design in 2002.
Sotiris Kovos
Sotiris Kovos was born in 1965 in Athens, he studied in Athens and Great Britain. He started his career in Peugeot and Mazda.
In 1999, in Toyota, he designed Yaris, that was his great success.
After this success, he became really famous and he presented many models , for example Lexus SC300 AND SC430. In 2002 he moved to Germany because he accepted Audi’s proposition.
Vicky Vlahaki
She was born in California. She loved cars very much since she was a child. So, she decided to study design in California. She started her career in Audi and then in Mercedes.
Her great success came in 2006 when she presented the Pontiac Solstice and Saturm Skyta.