In the depths of Aghia Sophia 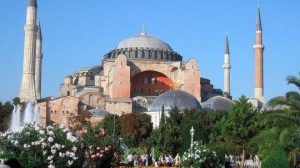 Documentary specialist, Gkioksel Gulensoi, two divers and 4 speliologists, attempting to reach the myths and secrets of 1700 years under the church of Aghia Sophia managed to reach areas that until now, no one had ever managed to reach, according to the Turkish press.
The most impressive find of this “tour” in the tunnels 283 meters in depth, were the remains that are said to belong to canonized children buried there before the 13th century as well as Patriarch Athanasios who was buried at the same are 200 years later.
The divers and specialists explored the connection of the basins underneath Aghia Sophia with the aqueduct and the palace of Top Kapi. In addition they attempted to locate the secret tunnels from Tekfour Palace to the Islands.
The documentary, whose shooting began in 1998, was just recently completed due to budget difficulties, the required number of permits necessary and the works that are underway at the Museum of Aghia Sophia.
The 50-minute documentary “In the depts. Of Aghia Sophia” will officially begin participating in various international festivals in the fall.
source: voice of greece