Disgraced Greek MEP Eva Kaili, a suspect in the EU Qatargate scandal, is to remain in pre-trial detention for at least one more month a Brussels court ruled on Thursday.

Kaili’s lawyers argued that she should be released until her case is taken to court, but the court ruled against this.

The Greek MEP is one of four suspects in pre-trial detention in Belgium following police raids on addresses last month that turned up 1.5 million euros in cash.

The other three suspects are former Italian MEP Pier Antonio Panzeri; the Italian boyfriend of Kaili, Francesco Giorgi, who is a parliamentary aide; and Niccolo Figa-Talamanca, the Italian head of an NGO.

Before the decision was announced, Kaili’s lawyers accused the Belgian authorities of keeping their client under “medieval” conditions that constitute a violation of human rights.

They claimed that their client remained in solitary confinement for several hours with interrogations in between. They also maintained that she is unable to either warm up or take care of herself under the conditions.

Her lawyers also referred to the fact that she has a 22-month-old child who at the moment is staying with friends and relatives of the client.

The court ruled that Kaili can appeal the decision within the next twenty-four hours. It is not immediately clear whether her lawyers will pursue the option.

Below is the translated ruling of the Belgian court. E.K. initials stand for Eva Kaili 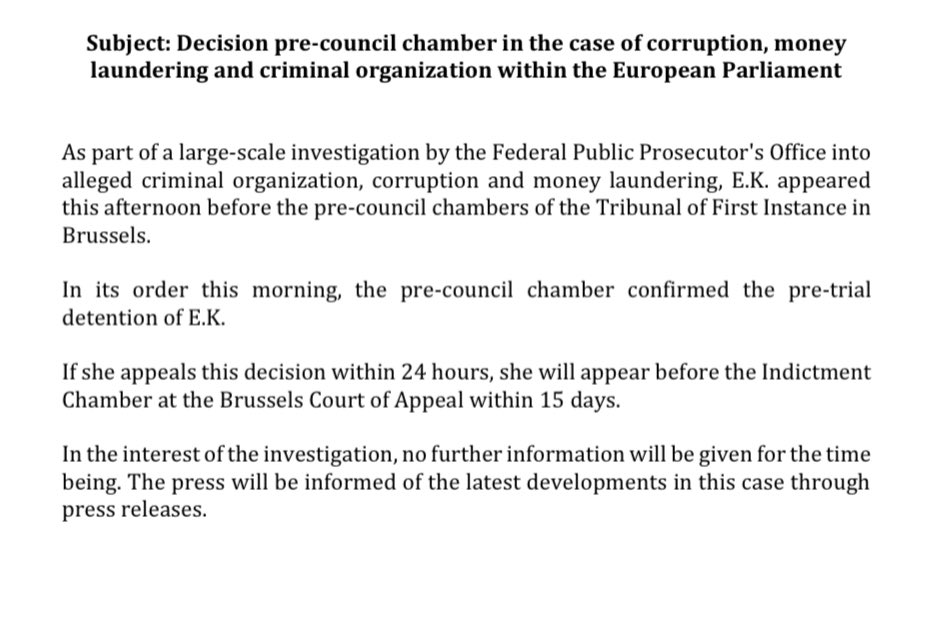 Key suspect in Qatargate scandal agrees to tell all

Earlier in the week, a key suspect in the EU Qatargate scandal, former Italian MEP Pier Antonio Panzeri, reached a deal with Belgian prosecutors to divulge information about countries involved and bribes made.

In return, he was being offered a “limited sentence” that includes imprisonment, a fine, and confiscation of one million euros ($1.1 million) in assets, the prosecutors said in a statement.

Prosecutors said Panzeri agreed to the plea deal under an informant law used only once before in Belgium.

Prosecutors said that, under the terms of the deal, Panzeri committed to truthfully tell investigators all about “the identity of the persons he admits to having bribed.”

He is also to divulge his methods, the “financial arrangements with other involved countries” and “the involvement of known and unknown persons within the investigation.”

Belgian prosecutors have requested that the European Parliament lift the immunity of two other MEPs, Belgian Marc Tarabella and Italian Andrea Cozzolino, to further their investigations. The legislature has launched that procedure likely to be completed next month.