GRNews
GreekReporter.comGreek NewsEnergyElectricity in Greece Still Most Expensive in Europe

Electricity in Greece Still Most Expensive in Europe

For the second week in a row, Greece has the highest electricity prices in the European Union. On Wednesday, the wholesale price was above 218 euros per MWh by far above every other country in the EU.

By comparison, Bulgaria and Romania have the second most expensive wholesale price with 188/MWh. Hungary and Italy follow with 184/MWh and 172/MWh, respectively.

According to data supplied by EU Energy, several EU countries are below the 100/MWh psychological barrier, with Germany and Denmark at only 59/MWh. 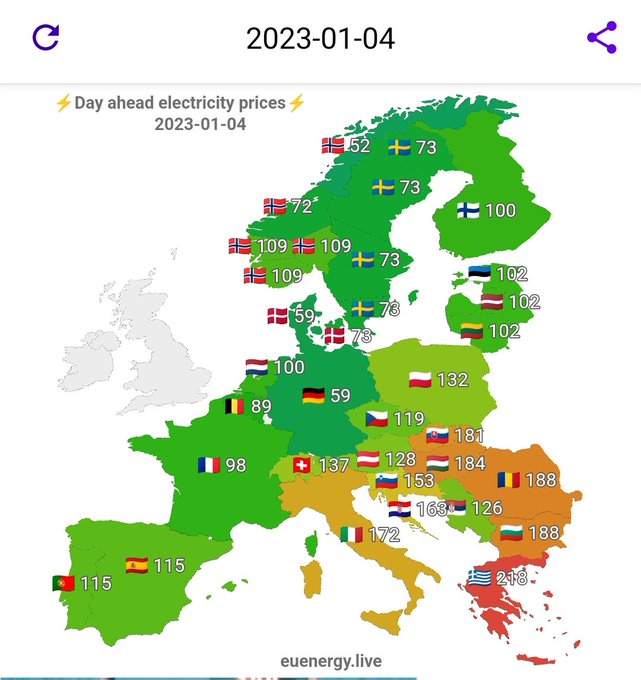 The relatively low prices in Europe reflect the significantly reduced demand for electricity due to the mild winter weather conditions and the decline in natural gas prices on the spot market.

The Greek government says the high electricity price is due to the peculiarity of the Greek wholesale electricity market. In Greece, the natural gas pricing model takes into account the average rate of the previous month against the daily price set in the stock market.

This delay does not allow for the immediate pass-on to the wholesale electricity price of the decline in the price of natural gas, as happened in the rest of the markets, the government claims.

However, as analysts point out, one of the main reasons for the high prices lies in the fuel mix for power generation in which natural gas has a dominant position with a percentage of over 40 percent. The share of lignite is low, while renewables can only set a price for a few hours.

Furthermore, limited production competition and interconnections are key factors that are pushing prices up.

The issue has been the subject of political controversy as opposition parties blame the government for “allowing profiteering” by electricity producers.

The main opposition party, SYRIZA, claims that domestic electricity producers have made surplus profits reaching 2.2 billion euros ($2.3 billion) in the period from June 2021 to July 2022.

SYRIZA says that the ninety percent levy imposed by the government on electricity producers was based on certified profits of only 373.5 million euros. It accuses PM Kyriakos Mitsotakis of handing over a “gift” of 1.8 billion euros to the “electricity cartel” and concealing its true profits.

The party’s leader, Alexis Tsipras, said recently that the government “stubbornly refuses” to regulate the energy market with a cap on the wholesale and retail price of electricity, limiting the profit margin of energy producers.

He called on the government to proceed “with real taxation of surplus profits and renationalization of [power utility] PPC so that it can function as a public utility.”

The conservative government has claimed that it would not allow any profiteering by domestic energy producers.

“From the beginning of this great test for Europe, the government and Prime Minister Kyriakos Mitsotakis pledged…that [they] would not allow any kind of profiteering,” Energy Minister Kostas Skrekas said.

“Our primary concern is to maintain affordable prices on consumer bills until the end of this major, pan-European energy crisis.”

So far, Greece has allotted more than nine billion euros to power subsidies and other measures since last September to help people and businesses pay utility bills.

The rising cost of energy bills in Greece has hit the industry and household  budgets. Inflation has been rising across many areas of life throughout 2022.

While rising energy prices affected most households across the country, they are more likely to disproportionately affect those with the lowest incomes, who spend a greater percentage of their income on essentials such as housing, electricity, gas, food, and transportation.