A new report on Greece’s wiretapping scandal alleged that defense chief General Konstantinos Floros has been under surveillance by the Greek intelligence service (EYP).

The paper Documento which has uncovered many aspects of the wiretapping scandal that has rocked the Greek government over the last months, says that the code name used for the surveillance of his phone by the Predator spyware was 519c. 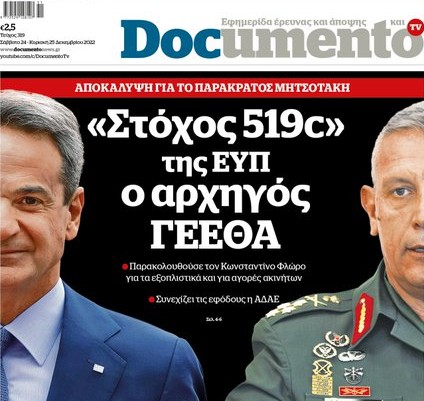 Gen. Floros has been appointed Chief of the Hellenic National Defence General Staff (HNDS) since the 17th of January 2020. Reports suggest that his tenure will be extended for at least another year.

Documento publisher Kostas Vaxevanis said that the report makes it clear that Gen. Floros knew he was under surveillance and he cannot continue as defense chief.

There has not been any official reaction to the report by the General Staff or the Greek government.

Earlier in December, Documento published telephone conversations with a prominent minister who was allegedly spied upon by EYP.

It said that for almost a year, from November 27, 2020 to November 17, 2021, the then Minister of Energy, Kostis Hatzidakis, was under surveillance. His phone was compromised by the Predator spyware operated by EYP using the code 5046c.

The Greek government has consistently denied that it used the Predator software to spy on politicians and journalists. It has admitted that such a system may be in operation in Greece but denies any involvement.

On Wednesday prosecutors investigating the wiretapping scandal requested the help of judicial authorities in the US in their work.

Two Greek prosecutors are trying to trace the digital footprints of electronic addresses included in text (SMS) messages, through which the Predator spyware was installed on the cellphones of politicians and journalists.

Under the new law, the use, sale or distribution of spyware in Greece will carry a penalty of a two-year minimum prison sentence.

Additional safeguards were also planned for legal wiretaps as well as for hiring the director and deputy directors of EYP.