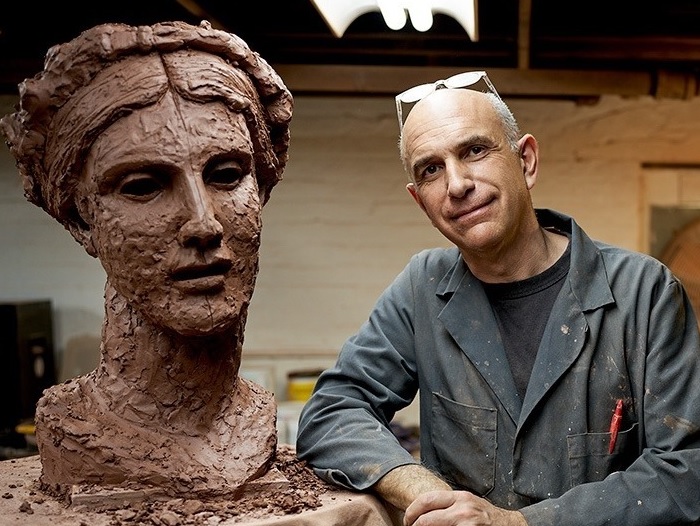 Marking the centennial of the Destruction of Smyrna in 1922 and the bicentennial of the Greek War of Independence, Petrides presents a personal exploration of his Greek background, seeking to understand the cultural influences that have shaped him and the people closest to him.

“As a Greek-American—born in Athens and having spent more than half my life in New York City—I have always been interested in my Greek roots, initially absorbing them through my family members: a grandmother who escaped the destruction of Smyrna in 1922 and parents who lived through the…Nazi occupation [of the 1940s] and ensuing Greek Civil War,” Petrides said.

“I continued studying these topics at Harvard College,” he said, “where I studied Classical Greek literature, philosophy and history, as well as four visits to Mount Athos, where I was steeped in art and culture from the Byzantine period.”

Petrides’s creative process is of his own invention. He often begins by sculpting in clay from a live model or historical photographs.

Next, the clay piece is scanned in 3-D, and the digital file is manipulated using sculpting software.

It is then 3D-printed or CNC milled in a size that is up to two-and-a-half times life-size. Petrides then reworks the piece by hand, using power tools and construction materials.

Often, the sculpture is then cast in bronze in Greece, using the same lost-wax process that was used by the ancient Greeks 2,500 years ago. Finally, various patinas are applied in a rich expressionistic manner.

Born in Athens in 1964, where he spent part of his childhood before relocating to New York, Petrides is steeped in ancient Greek sculpture and the works that came to be influenced by it (Donatello, Michelangelo, Auguste Rodin, Aristide Maillol, et al.) as well as the 20th-century modernists who re-interpreted these traditions.

“Hellenic Heads is an artistic dialogue between the past and present, elucidating the universal character of Greek culture and its fundamental role in shaping Greek identity,” said Eleftheria Gkoufa, cultural manager.

“This traveling exhibition highlights the necessity of art and the importance of the creator in modern society and conveys intercultural dialogue through cultural diplomacy,” she said, emphasizing that cultural diplomacy is “key to the mutual understanding of other nations and their cultural heritage, as it examines human development through artistic creation.”

Hellenic Heads: George Petrides will be on view at the Maliotis Cultural Center until the end of November 2022.