Greeks and Cypriots are the least likely among Europeans to put the blame solely on Russia for the war in Ukraine, according to a Europe-wide survey conducted by Eurostat, the statistical body of the EU.

The survey was conducted in the 27 Member States from April 13th to April 20th of 2022  and participants were 26,066 EU citizens who were interviewed online.

Published on Friday, it shows a large number of EU citizens favor the EU’s response to Russia’s invasion of Ukraine. Respondents are widely in favor of unwavering support for Ukraine and its people.

Greeks and Cypriots were reluctant to blame Russia in the survey

However, respondents in Greece and Cyprus have different views on whether Russia is primarily responsible for the war.

In Cyprus, 21 percent totally agree and 24 percent mostly agree. Those who mostly disagree are at 28 percent while those who totally disagree with the statement comprise 23 percent of the Cypriot votes.

The majority of Cypriots do not see Russia as first and foremost responsible for the war, whereas in Greece, public opinion is nearly evenly split, according to the Eurostat survey. 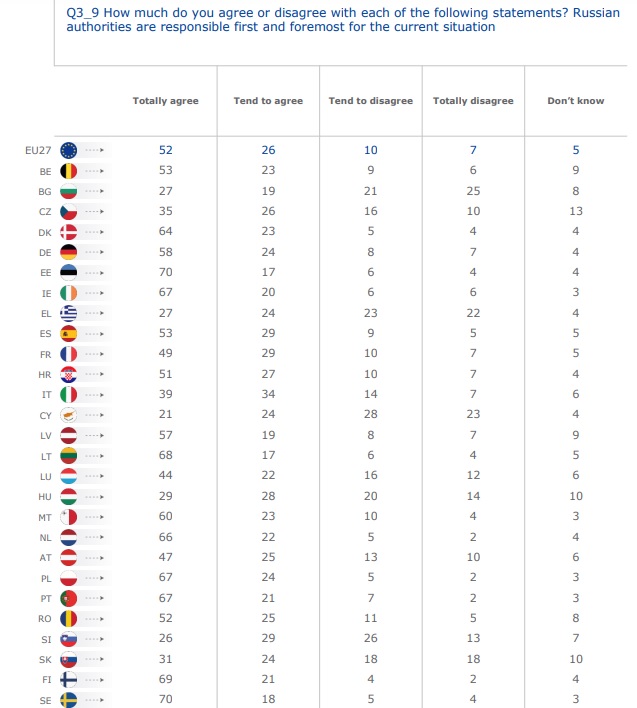 In addition, whereas the majority of Europeans support the supply of military equipment to Ukraine (67 percent approve or mostly approve), Greeks and Cypriots are against this, at least according to the survey.

Key findings of the survey

The majority of Europeans believe that since the war started, the EU has shown solidarity (79 percent), been united (63 percent), and been quick (58 percent) in response.

In particular, more than nine out of ten respondents (93 percent) approve of providing humanitarian support to the people affected by the war, and 88 percent of Europeans approve of the idea of welcoming in people of the EU fleeing the war. 80 percent approve of the financial support provided to Ukraine while 66 percent agree that ‘Ukraine should join the EU when it is ready.’ Furthermore, 71 percent believe that Ukraine is part of the European family, and 89 percent feel sympathetic towards Ukrainians.

Two-thirds of Europeans (67 percent) approve of the EU financing the purchase and supply of military equipment to Ukraine. In addition, 75 percent believe the war in Ukraine shows ‘we need greater military cooperation within the EU.’

The survey also evidences broad support for the EU’s actions in the field of energy to minimize dependency on Russian fossil fuels.

There is widespread consensus for filling up EU gas storages to avoid shortages next winter (86 percent), as well as for EU measures to increase the energy efficiency of buildings, transport and goods (85 percent). There is strong agreement (84 percent) that the war in Ukraine makes it more urgent to invest in renewable energies.

Related: What Has Russia Ever Done For Greece?