Clashes in Ukraine Provide Possible Pretext for Russia to Invade

Clashes have erupted in eastern Ukraine on Saturday between Russia-backed separatists and the Ukrainian army perhaps giving the pretext as the US has warned for weeks for President Putin to launch an invasion.

Ukraine’s military reports two soldiers were killed and four more injured in what is certainly the most serious escalation along the eastern frontline in a long while.

Heavy 120mm & 82mm mortars, 122mm artillery & automatic machine grenade launchers, and even tank fire were recorded during the clashes, according to reports.

Earlier, the separatists had ordered military mobilizations. Men of fighting age in the self-declared people’s republics of Donetsk and Luhansk are being put on stand-by.

International monitors report a “dramatic increase” in attacks along the line dividing rebel and government forces. 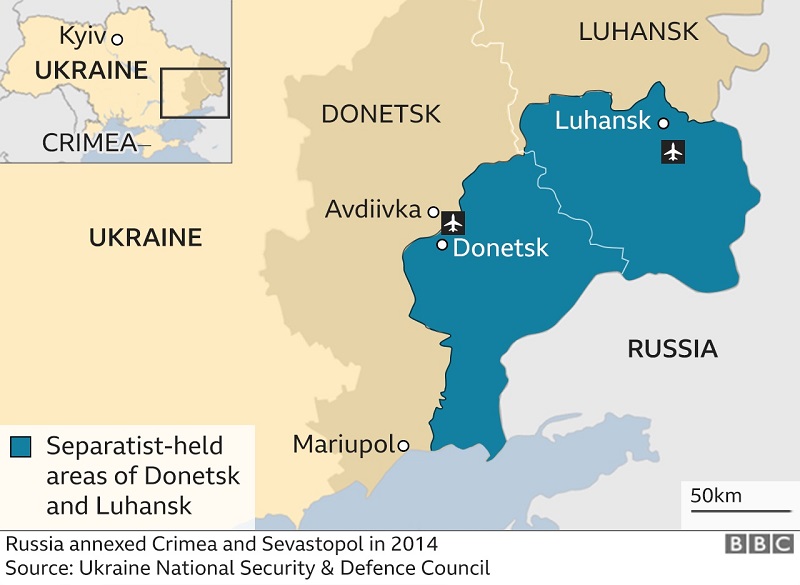 BBC says that accurate figures are difficult to establish but as many as 3.5 million people live in the two rebel territories, which broke away in 2014 after Ukraine’s pro-Russian government was overthrown.

Since then, at least 720,000 have acquired Russian citizenship, according to Russian media.

According to the readout:

“The vice president underscored the US commitment to Ukraine’s sovereignty and territorial integrity. They discussed the united transatlantic approach if Russia further invades Ukraine, and the vice president outlined the swift and severe economic measures that have been prepared alongside our allies and partners. The vice president and President Zelenskyy agreed on the importance of diplomacy and de-escalation.”

In the face of Russia’s military buildup, the United States stands with Ukraine. As I told President Zelenskyy in Munich, we are committed to Ukraine’s sovereignty and territorial integrity. pic.twitter.com/mu7NqVgblT

If Russia were to invade Ukraine, “we will impose far-reaching financial sanctions and export controls,” Harris said in remarks in Germany. “We will target Russia’s financial institutions and key industries. And we will target those who are complicit and those who aid and abet this unprovoked invasion.”

On Friday President Joe Biden said that the United States believes that Russia has decided to launch an invasion of Ukraine “in the coming days.”

“We have reason to believe the Russian forces are planning and intend to attack Ukraine in the coming week, in the coming days,” Biden said in remarks at the White House. “We believe that they will target Ukraine’s capital, Kyiv, a city of 2.8 million innocent people.”

“As of this moment I am convinced that he has made the decision,” he added, referring to President Putin. Previously, the president and his top officials have said they did not know whether this was the case.