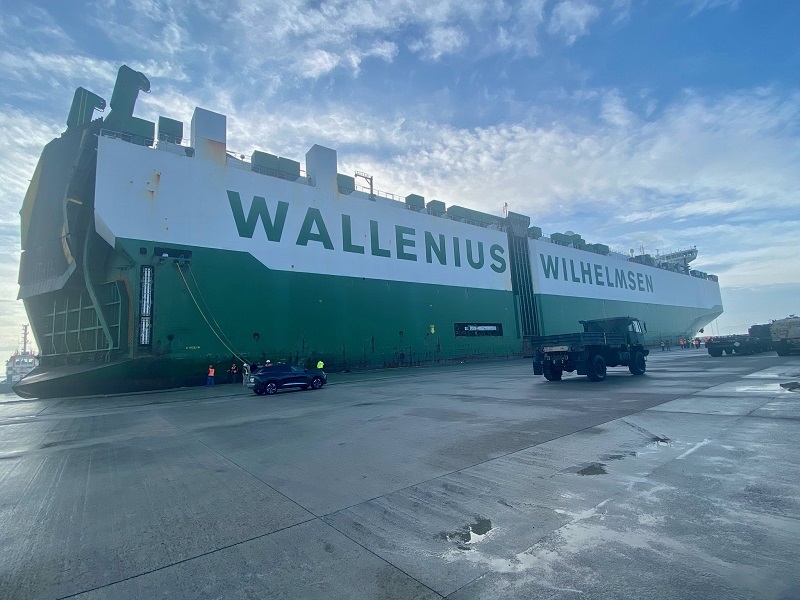 The carrier is transferring helicopters and military vehicles that will participate in the upcoming NATO exercise “Atlantic Resolve.”

Konstantinos Chatzimichail, Chairman of the Alexandroupolis Port Authority, welcomed the vessel in a series of tweets.

He also shared a photo of the first helicopter brought to land from the gigantic vessel.

The carrier, which was built in 2007 in South Korea, is currently sailing under the U.S. flag. Formerly also known as “Faust, Faust,” its gross weight is 72,118 tons.

Over the next few days, additional U.S. transport ships are expected to dock at Alexandroupolis in preparation for the military exercise.

A large number of helicopters, unmanned aerial vehicles (UAVs), tanks, cannon, and artillery are expected to reach the Greek port near the border with Turkey as part of an extensive military shipment that is of an unprecedented scale.

Operation Atlantic Resolve began in 2014 was in response to Russian aggression against Ukraine. The U.S. at that time took several immediate steps to enhance the deterrence posture along the eastern flank of NATO, including augmenting the air, ground, and naval presence in the region, and enhancing previously scheduled exercises.

Alexandroupolis: A US and NATO military hub

“This was a region which, when I arrived in Greece in 2016, seemed somewhat forgotten. This is no longer the case. I am very proud of the partnerships we have built, not just with respect to military cooperation and security, which is exceptionally important, but also, for example, in energy, with the FSRU, the natural gas power station, the IGB and TAP pipelines,” Pyatt said.

The U.S. has since committed to expanding its military operations in the port, as envisaged by the recently signed bilateral Mutual Defense and Cooperation Agreement. Just a few miles away from the Turkish border, the upgrade of the previously quiet fishing port has annoyed Ankara.

Recently, Turkish President Recep Tayyip Erdogan expressed his discomfiture over the future deployment of US troops in Alexandroupolis.

Speaking to reporters on his return from the G20 summit in Rome, where he met with US President Joe Biden and French President Emmanuel Macron, Erdogan said “we raised the issue with both Biden and Macron.”

“We said ‘what is the issue with Alexandroupoli? Establishing a base there bothers us and our people,’” he stated.