At least one person was killed and several were slightly injured after a powerful 5.8 earthquake rattled Crete, an island in Greece, on Monday morning.

The quake occurred at 9:17, AM, 23 kilometers (14 miles) northwest of the town of Arvi in the heart of ​​Heraklion prefecture, Crete, as announced by the Geodynamic Institute.

Reports say that a 65-year-old person was killed when a church collapsed in the village of Arkalohori. Another worker in the same church was freed from the rubble, unharmed, by the rescue workers.

Meanwhile, another citizen in the village of Patsideros, who was trapped inside his house, was rescued after he could not open the door due to the damage after the earthquake.

There has been significant damage to the water supply system and buildings in the wider administrative district of Archanes Asterousia on the island of Crete, Archanes Mayor Manolis Kokosalis reported.

Reports say that the earthquake had an especially long duration and Heraklion residents were forced to abandon homes and offices.

The earthquake was felt throughout Crete and as far away as Santorini.

Damage to buildings in Crete earthquake

The village of Arkalochori was at the epicenter of the earthquake, where some buildings collapsed or sustained damage. Parents were notified to pick up their children from the schools.

The quake had a focal depth of ten kilometers. Two aftershocks of 3.8 and 4.5  on the Richter scale were also recorded. The European-Mediterranean Seismological Center and the US Geological Survey gave a preliminary magnitude of 6.0. It is common for different seismological institutes to give varying magnitudes for an earthquake in the initial hours and days after an event. 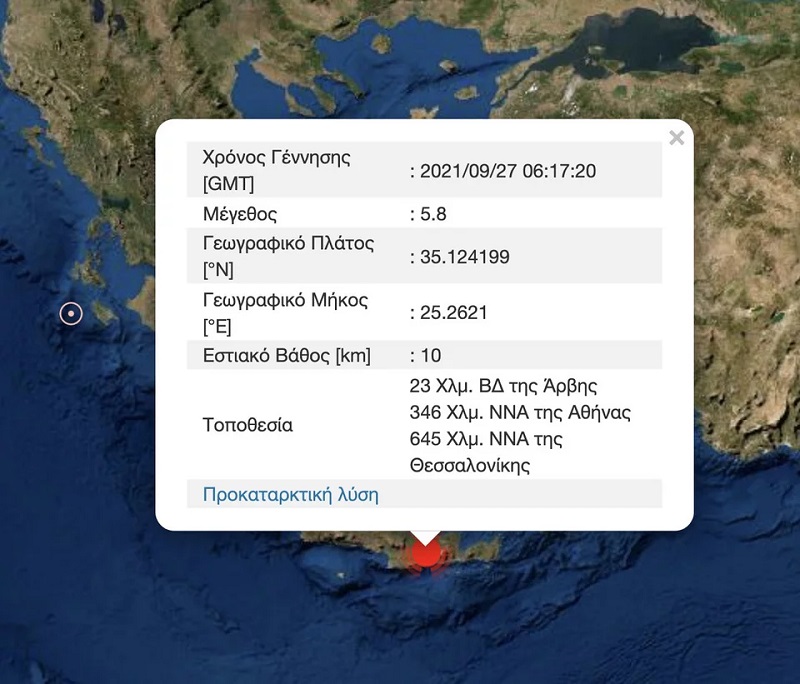