Greek shipping continues its astonishing growth, confirming Greece’s position as the number one seafaring country in the world, according to a new report.

The value of the Greek-owned merchant shipping fleet grew over 32% in the past three years and now stands at $132.58 billion, says a report from the consultancy firm VesselsValue.

The report, conducted on behalf of the Greek daily Kathimerini, says that Greece’s active fleet consists of 4,546 ships with a total value of $117.59 billion.

To those, add the 187 vessels that are now under construction, worth a whopping $14.99 billion. The increase in value is mainly the result of higher fees for container and dry cargo ships, but even for tankers, where fees have not risen as much, there has been a significant increase in value.

The report also notes that the composition and size of the Greek merchant fleet have also changed. The number of vessels may have not changed much – the number of operating plus under construction ships stands at 4,833, up from 4,574 in 2018 – but the average tonnage per ship has increased.

The VesselsValue research says that in 2018, tankers accounted for the highest value among Greek-owned ships, followed by dry cargo and liquid natural gas (LNG) transport ships. Container ships were a distant fourth. In 2021, dry cargo ships have overtaken tankers in value, however, and container ships have climbed to third place.

Dry cargo ships, both operational and under construction, are now worth $46.7 billion, while tankers are worth $39.1 billion. Container ships, or boxships, as they are also called, are worth $23.46 billion. The number of Greek-owned boxships is441, compared to 1,458 tankers and 2,326 dry cargo ships.

It is in the container ships category that there has been the highest increase in vessels. In slightly over a year, the cost of transporting a 20-foot equivalent unit (TEU) container has risen from $1,000 to $12,000.

A report by the Union of Greek Shipowners (UGS)  confirmed that Greek shipping remains number one in the world.

Although the country accounts for only 0.16% of the world’s population, Greek shipowners own 20.67% of global tonnage and 54.28% of the European Union (EU)-controlled tonnage, the report said.

Greece is a maritime nation by tradition, as shipping is arguably the oldest form of employment in the Greek world and has been a key element of Greek economic activity since ancient times.

Today it is the second largest contributor to the national economy after tourism.

First established in 1916, the UGS represents Greek-owned vessels over 3,000 gross tons under Greek and other European and third country flags.

Between 2007 and 2019, Greek shipowners more than doubled the carrying capacity of their fleet, while they control: 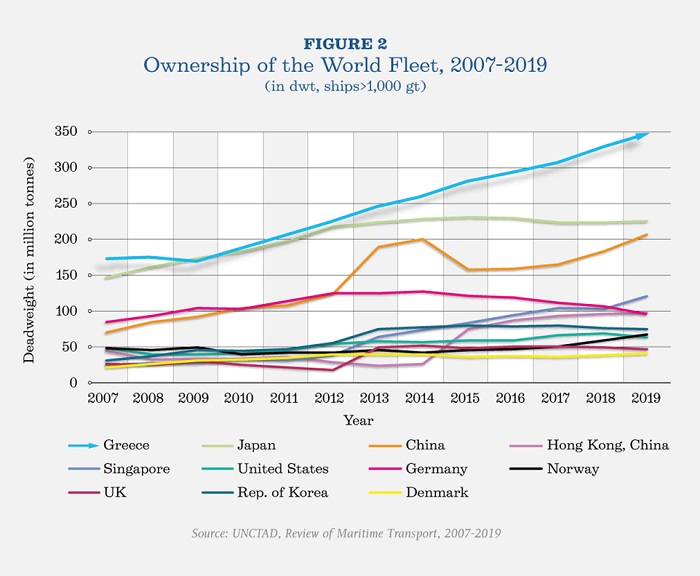