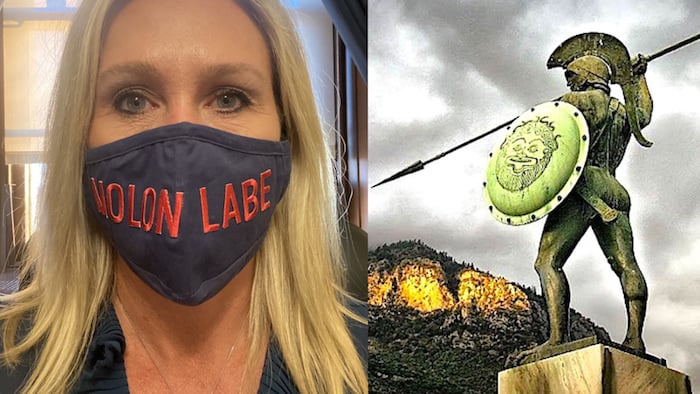 Congresswoman Marjorie Taylor Greene (R-GA. 14) faces censure, as her outlandish views threaten the unity of the Republican Party, while Democrats ask for her expulsion from Congress.

Greene, who has misappropriated the famous words of Leonidas and his brave 300, has made many people in Greece and the Greek-American community in the U.S. furious over the abuse of “Μολών Λαβέ” (Molon Labe).

The new Congresswoman has been seen wearing the mask and a T-shirt with the Molon Labe phrase on several occasions.

Seeing @mtgreenee wearing a MOLON LABE mask is sickening. The ancient Greek phrase has been misrepresented and adopted by far right/white supremacist groups worldwide, including the fascist group Golden Dawn in Greece. pic.twitter.com/ebh5OHc6jW

However, the legendary words Leonidas spat at Xerxes’ face have been used falsely by Greene in defense of the gun lobby and the outrageous QAnon conspiracy theories she espouses.

Leonidas’ “come and get it” to Xerxes was the response to a foreign king who invaded Greece to conquer it. Xerxes had asked Leonidas to surrender and let the Persian army march in.

The irony here is that, in essence, the QAnon believers invaded the Capitol on January 6 like the Persian army invaded Greece two dozen centuries ago. So, who should really wear a Molon Labe mask?

Wednesday is a critical day for the Republican Party as two major forces will compete over which side will prevail: the conservatives or the extreme-right.

On Wednesday the House will vote for or against removing Greene from her assigned education committee.

As member of the committee, Greene had suggested that the school shootings in Newtown, Connecticut, and Parkland, Florida, could be false-flag operations.

Third-ranked GOP House leader Liz Cheney represents the traditional conservative party line. She has called for the impeachment of former president Donald Trump and far-right lawmakers want to oust her from her leadership post for this reason.

Greene, on the other hand, is a Trump loyalist who represents the extreme right side of the party. Democrats accuse her of hate speech, racist views and condoning violence against Democrat politicians.

Marjorie Taylor Greene (46) was elected as a U.S. representative for Georgia’s 14th congressional district in November 2020 and sworn into office on January 3, 2021.

A devout Trump supporter, on her first day on the House floor, Greene wore a face mask reading “Trump Won”, contrary to the election results.

During the counting of electoral votes, Greene raised an objection to counting Michigan’s  electors. The objection was not signed by a member of the Senate and therefore was invalid.

An avid pro-gun activist, she has declared that “The government will never tell me how many guns I can own, and how many bullets I am allowed to fire if someone were to attack me or my kids.”

In regards to the coronavirus pandemic, she has described restrictions in the U.S. Capitol such as face mask requirements as “Democrat tyrannical control” and opposes compulsory vaccination and lockdowns.

According to a CNN report, in her Facebook account in 2018 and 2019 expressed support for the idea of executing leading Democrats and FBI agents.