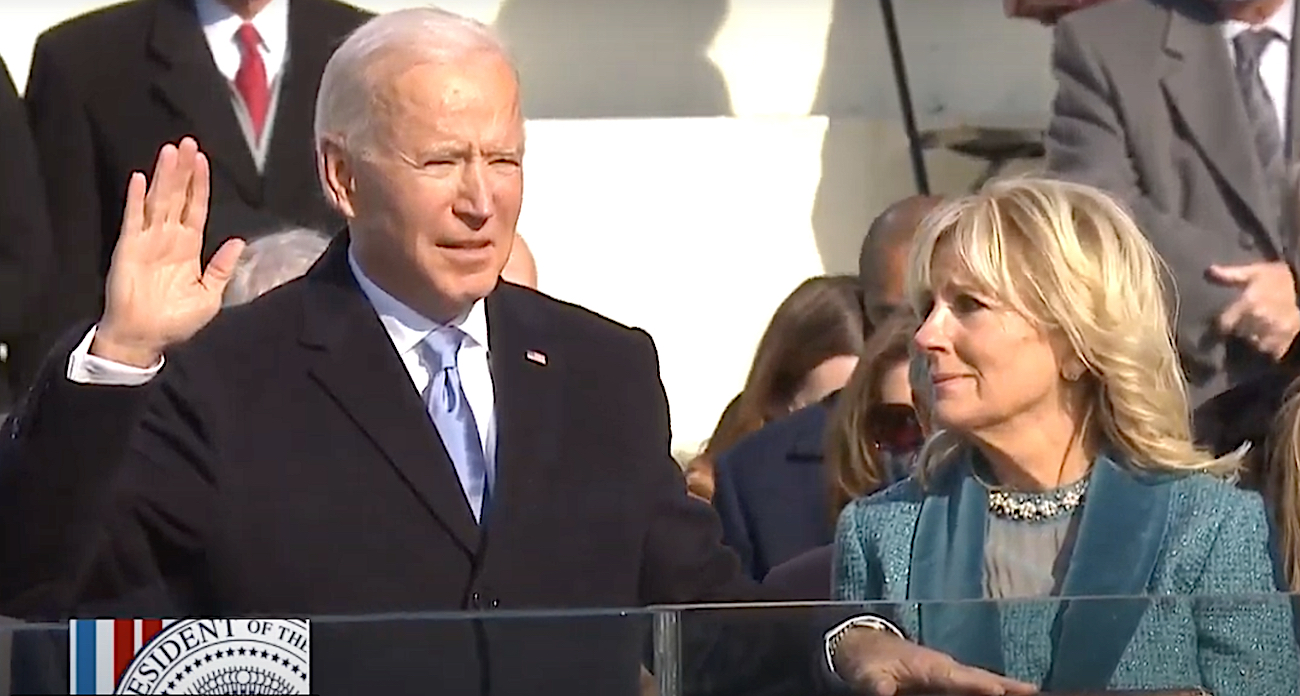 President Joe Biden took the oath of office in Washington DC on Wednesday, in the middle of a city that was nearly deserted due to pandemic restrictions and crowd-control measures.

In place of the typical throngs of people who assemble on the lawn of the Mall, stretching far away from the Capitol building, hundreds of thousands of American flags waved in a mute tribute to the measures that have been put in place because of the pandemic — and the unrest that occurred on January 6, when the Capitol itself was breached by protestors.

For the first time in history, there were no members of the public attending the swearing-in ceremony — and, for the first time since 1869, no sitting President and First Lady looking on to see the next President take on the heavy duties of running the nation.

Vice-President Mike Pence and Second Lady Karen Pence instead performed the ceremonial duties of appearing at the inauguration and later welcoming the new President and First Lady Jill Biden to their new quarters in the White House.

Former Presidents Barack Obama, Bill Clinton and George W. Bush will join President Biden and Vice-President Kamala Harris at Arlington National Cemetery for a wreath-laying ceremony at the Cemetery’s Tomb of the Unknown Soldier after Biden’s swearing-in ceremony outside the Capitol.

President Biden and Vice President Kamala Harris will lay the wreath after they take the oath of office and conduct a Pass in Review inspection of the troops assembled at the Capitol building.

“This is America’s day”

The newly-sworn in President spoke about the deep divisions that remain in America today, as he stated “Few people in our nation’s history have been more challenged or found a time more challenging or difficult than the time we’re in now.

“To overcome these challenges, to restore the soul and secure the future of America, requires so much more than words and requires the most elusive of all things in a democracy: unity.”

In an attempt to unify the nation, Biden championed reasoned discourse, which has been sorely lacking on the American political scene of late:  “Politics doesn’t have to be a raging fire, destroying everything in its path,” he stated. “Every disagreement doesn’t have to be a cause for total war. And we must reject the culture in which facts themselves are manipulated and even manufactured.

“Recent weeks and months have taught us a painful lesson,” Biden said in his address. “There is truth and there are lies.”

President Biden then invoked a spirit of hope as he noted the historic events of the day, saying “Here we stand, looking out on the great Mall where Dr. King spoke of his dream.

“Here we stand, where 108 years ago at another inaugural, thousands of protesters tried to block brave women marching for the right to vote. And today we mark the swearing in of the first woman in American history elected to national office, Vice President Kamala Harris. Don’t tell me things can’t change.”

Later, a motorcade brought former Vice-President Pence and Second Lady Karen Pence, President Biden and First Lady Jill Biden to the White House, and the new President and his wife were given the courtesy of being officially welcomed to their new residence.

Former President Trump and First Lady Melania had departed Washington earlier in the day for their home in Florida after a military send-off, including bands and a 21-gun salute.

Trump was the first sitting President since the mid-1800s to decline to participate in the inauguration of his successor. When he himself was inaugurated four years ago, most Democrats boycotted the event, but his refusal as President to take part in Biden’s inauguration was seen as a slap in the face of the American tradition of the peaceful transition of power.

Last week, a huge demonstration turned into a riot as some demonstrators breached the Capitol and barged into the halls of Congress, almost making their way into the Senate chamber where Vice-President Pence was presiding over the formal acceptance of the electoral votes from the November election.

Biden charged Trump with inciting the protestors, saying that they “had the active encouragement of a sitting president of the United States” and that they were “domestic terrorists” who must be prosecuted.

The National Guard was eventually called to bring order to the Capitol, which they proceeded to do in short order, and the city is now ringed with protective barriers and armed Guardsmen in an attempt to quell any unrest that might occur during the inauguration.