Pierre Cardin, who passed away on December 29, 2020, was the designer of the Olympic Airways flight attendant uniforms in the glory days of the airline.
The French-Italian fashion designer’s revolutionary styles of the 1960s and the 1970s were a crucial part of the youth explosion of the era, worn by the likes of the Beatles and other international celebrities in the swinging sixties.
Impressed by the modern, stylish clothes of the designer, Greek shipping mogul Aristotle Onassis decided to hire Cardin to design the uniforms for the flight attendants. 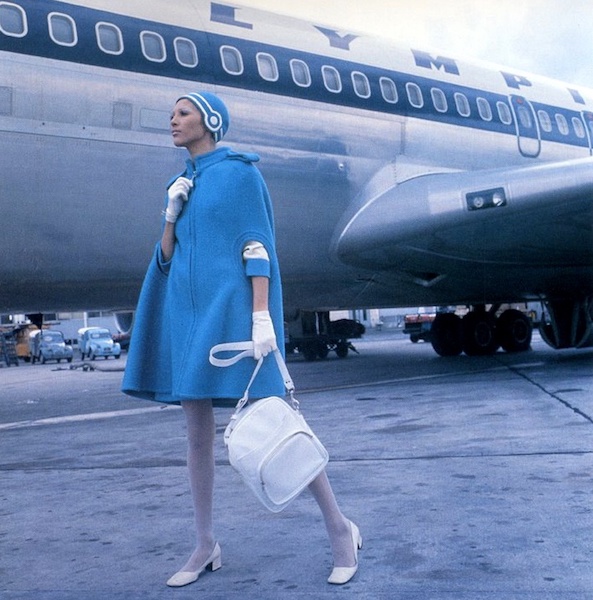 Onassis had bought the financially ailing TAE Greek National Airlines from the Greek state in 1957 and renamed it Olympic Airways. His vision was to make the airline one of the most modern in the world.
Under Onassis’ leadership the airline gained a reputation for lavish style. The cabin crews wore Pierre Cardin-designed uniforms and passengers ate with golden cutlery and listened to a piano player in the first class cabin.
For Greeks, Pierre Cardin’s fashion designs were popularized with the flight attendant suits he designed for Olympic Airways.
The 1960s was known as the jet age and Onassis accordingly upgraded the airline fleet to usher in the new age. He went to Cardin to materialize an important part of that vision.
It was a golden age for both Cardin and Onassis. The two visionaries in their respective fields joined forces to create air travel journeys full of luxury and futuristic style.

Born in Italy in 1922, he moved to France and at the age of 14 he took his first steps in fashion working as an apprentice in Vichy. During World War II he worked for the Red Cross.
After the war he moved to Paris where he studied architecture and collaborated with Paquin. He became head of the Christian Dior studio in 1947, but refused to work at Balenciaga.
He founded his own fashion brand in 1950 and started haute couture in 1953. He was the first to search for inspiration in Japan when he traveled there in 1959.
In the 1960s he introduced minimal, futuristic designs, creating clothes for the emerging pop culture. In the 1970s he was the first to combine “mini” and “maxi” skirts.
In the 1970s, Cardin introduced another new trend: “mod chic”. Inspired by space travel and exploration, he visited NASA where he tried on the original space suit worn by the first man to land on the moon, Neil Armstrong.
Cardin then created his own design for NASA in 1970. In 1971, he redesigned the Barong Tagalog, a national costume of the Philippines.
In 1975, he opened his first furniture boutique, with designs inspired by his fashion creations. In 1977 and 1979, he was awarded the Cartier Golden Thimble for the most creative collection of the season.

Greece has now surpassed 850,000 Coronavirus vaccinations, while another 50 vaccination centers will be added to the current 750.
Charity