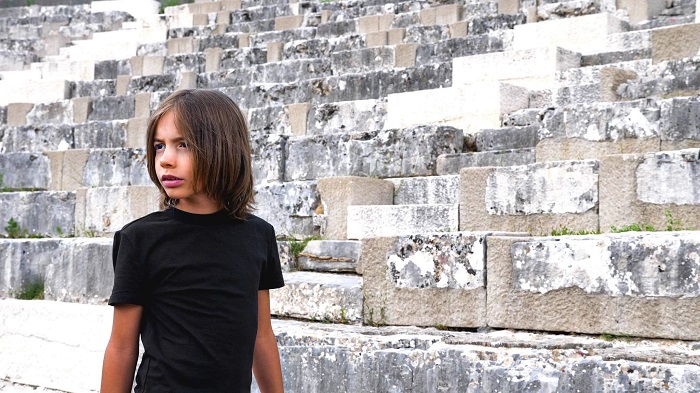 Stelios Kerasidis, the eight-year-old Greek piano prodigy and composer, has brought a traditional Greek folk song from the region of Epirus into the modern era.
Kerasidis’ Isolation Waltz, which he wrote in March of 2020, went viral as people around the world were amazed by the child’s breathtaking creative talents.
The song was inspired by the impact of the coronavirus epidemic, so deeply felt all around the world, and the isolation that many are facing while in quarantine.
This is not the first time Kerasidis, who has been playing piano since he was three years of age, has received international attention for his outstanding musical ability.
In 2018, when the long-locked boy was just five years of age, he won first place in the Golden Classical Music Awards.
Children from around the world participate in the prestigious musical competition, and the winners have the opportunity to play at the iconic Carnegie Hall in New York City.
When Kerasidis performed there in 2018, he became the youngest Greek musician to ever play at the historic venue.
His most recent project is a modern take on the traditional Greek song from Epirus, Gianni Mou To Mantili Sou, which features his own interpretation of the song on piano, accompanied by the traditional clarinet.

Greek and U.S. Coast Guard and naval forces conducted joint exercises in the Arabian Gulf in one of the most strategically-important areas of the world.
Read more
Greece

Americans have been a major part of summer tourism in Greece. Although they may not make up the largest contingent of visitors, they spend more.
Read more