GRNews
GreekReporter.comDiasporaHOPE: A New Orthodox Initiative Helping Those in Need in the Midwest

HOPE: A New Orthodox Initiative Helping Those in Need in the Midwest 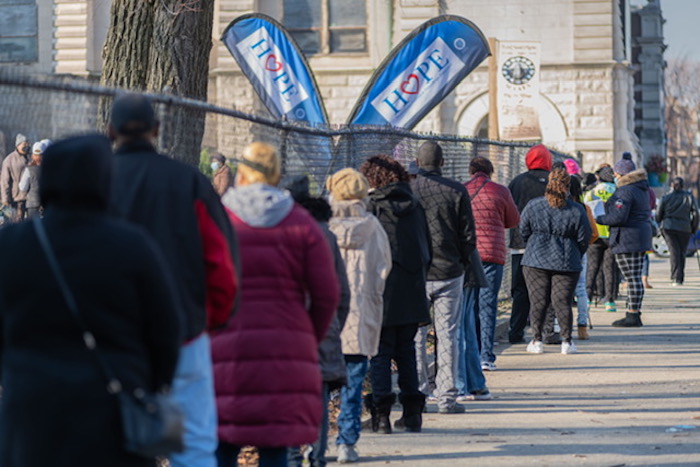 A new philanthropic effort called the Humanitarian Outreach for Philanthropic Engagement, project HOPE has recently been launched for those in the Midwest who find themselves in need during these difficult days of the pandemic.

In an effort to reach those who may need assistance living in the six states belonging to the Greek Orthodox Metropolis of Chicago, including Illinois, Michigan, Wisconsin, Missouri, Indiana and Iowa, the new effort hopes to reach out to populations that may not have been traditionally served by the Metropolis.

Project HOPE is a new way for Greek Americans to assist all Americans — not just other Greeks or Christians — in this difficult time, when some have been out of work since the beginning of the pandemic or face new issues with new state lockdowns looming ahead.

Chaired by Yanni Sianis, the Chief of Staff at Chicago-based Calamos Investments, the new charity, which is a ministry of the Greek Orthodox Metropolis of Chicago, aims to partner with parishes and with local networks to help provide food security and stable housing to those in need.

Since its inception HOPE has distributed tons of food, on several different occasions.

“Project HOPE exists both as a method to provide humanitarian aid to those who require it, and as a calling to our brothers and sisters to, according to the Holy Gospel, harness their gifts to serve others and faithfully administer God’s grace,” said Sianis.

“Throughout the life of this ministry, we pledge always to maintain both these imperatives.”

“It’s been a work in progress, we started out not too long ago — about six months,” he explains in an interview with Greek Reporter. Two years ago, when the young Metropolitan Nathanael acceded to his position, it was his intention to develop a humanitarian initiative that would reach beyond the normal scope of the church’s already – existing charitable organizations, such as Philoptochos and others, which are a part of every one of the 58 parishes of the Metropolis.

His Eminence Metropolitan Nathanael intended to create an overarching initiative that would reach out to all those in the Midwest who were in need, especially those who were in dire straits. One year ago, Sianis was asked to be on the Metropolis Council, and the vision that the two men had shared became a reality just months later when Project HOPE was created.

Geared to helping those who are absolutely the most in need, to date project HOPE has distributed over 15,000 meals to the needy, and the project’s volunteers have assembled and distributed more than 5,000 “Covid-19 Kits,” which include sanitizer, masks, water bottles, snacks, and rubber gloves, as well as “Care Kits” for the homeless which include bottles of water, deodorant, dental hygiene supplies, and snacks.

Another impetus for the formation of the charity was to provide a way for the youth of the Metropolis to engage with their faith, to make the Church’s teachings a reality by allowing them an opportunity to help their fellow humans in a concrete way.

Faith and Works Allow Youth to Practice Teachings of the Church

As Sianis says, many young people nowadays “have become disconnected from their church and from their faith. Everyone is searching for reason and meaning. As (the Bible) says, ‘Faith without works is dead’ – HOPE provides a way for young people to connect and provides a deeper experience of faith.”

Although this incredibly difficult year clearly has increased financial need for many around the nation, Sianis and the Metropolitan believe Project HOPE will become “sustainable in the long-term, even when we are gone,” he says, many years down the road.

“As the ministry continues to grow, Project HOPE will become scalable throughout all the 58 parishes and support all six states in the Metropolis,” notes Sianis. Asked by Greek Reporter how much the need has increased over the last year due to the pandemic, he says it is very difficult to assess, but before the pandemic “there were 86,000 homeless people living in Chicago. Now, due to COVID-19, this amount has risen exponentially.”

“As winter approaches, the situation worsens with businesses closing and homelessness increasing.”

Adding that the mental health component is another serious, related issue that the group also helps people to deal with, Sianis says the need is greater now than ever.

“The situation is worse than we think, especially as winter is coming on, there are people who have lost businesses and are now on the street.”

“I think we have accomplished some good things,” Sianis remarks, “but it’s a just a start. There are so may different types of need, so many pockets of need,” he explains.

The organization has already partnered with many other groups having more experience, working with them to provide the most immediate help to those who are in desperate situations.

2000 Thanksgiving Meals, With All the Fixings

On Monday, Project HOPE served more than 150 meal boxes, each including a delicious 12-14 pound turkey for Thanksgiving, which will feed a family of five for 10 days.

Under the leadership of Dena Pavlopoulos and her membership on the Rush University Medical Center Auxiliary Board, Project HOPE partnered with the community engagement program at Rush Univeristy Medical Center Downtown to support the hard-hit and poverty stricken West Garfield Park community. Likewise, because of this collaboration, Sianis says Project HOPE was also able to build a relationship with Reverend Dr. Elijah Hatch Sr., Senior Pastor of the New Mount Pilgrim Missionary Baptist Church, and identify areas of need in the community.

“Our numbers for the year will actually exceed north of 15,000 meals served, in addition to over 5,000 Care and Covid kits and our help with the various groups regarding emergency shelter,” Sianis states.

HOPE also regularly collaborates with Deborah’s Place – a facility for female domestic abuse victims; The Night Ministry – a program that provides emergency shelter and food for troubled youth and pregnant teens in need of support; and La Casa Norte, an organization that supports the Latino community.

As Sianis explains, as many as one in three young Latinos in the Chicago area are living in poverty.

For Christmas, Sianis says, the plan is to provide as many meals as they did at Thanksgiving — all over again. Working with already-established agencies such as “Top Box,” which designs and prepares meals, makes it easier for HOPE to leverage all the monies it receives and make sure they are distributed quickly and efficiently.

But the Greek Orthodox faithful themselves are often the ones doing the hard work of preparing the meals and assembling the supplies that are eventually given out by Project HOPE.

Weekly, volunteers put together entire boxed meals on the campus of the National Hellenic Museum as part of Project HOPE’s efforts to engage the Metropolis’ parishioners in the mission.

Other Greek organizations such as the Hellenic American Leadership Council (HALC), who played an integral role during the infancy of Project HOPE, along with the Philoptochos of the Metropolis and other youth groups, helped make Project HOPE what it is today.

By early November, Project HOPE had supported well over 5,000 families and individuals throughout the Chicago area.

“I am truly grateful for the opportunity to serve along with the Metropolitan and an amazing committee of individuals that are constantly inspiring each other to do good work for the community.

“What started as a food program in a church basement is now a broader ministry of our Holy Metropolis that provides care to the most vulnerable in the Chicago area,” said His Eminence Metropolitan Nathanael.

“A Living Expression of Christian Love”

“I am proud of the leadership and hard work of the laity and clergy who established Project HOPE as a living expression of Christian love, and I am pleased that this initiative is a direct outcome of the Strategic Leadership and Transformative Action executive education program at the Fletcher School of Tufts University, which was made possible through generous funding by FAITH: An Endowment for Orthodoxy and Hellenism.”

Nathanael also warmly thanked Illinois Secretary of State Jesse White, Alderman Walter Burnett and U.S. Rep. Jerry Garcia for their collaboration as well as the Hellenic American Leadership Council for its volunteer and logistical support and the National Hellenic Museum for providing space to store and organize food for delivery to those in need.

His Eminence also expressed his appreciation to Fr. Peter Spiro for helping the Metropolis of Chicago develop a broader, metropolis-wide, philanthropic and humanitarian mission.

As Sianis says, the Metropolitan had initially intended one year ago to re-engage the Metropolis’ youth by “teaching, learning and engaging them through philanthropy.” HOPE has already done just that, making a difference in society and bettering the lives of battered women, low-income minority families, the homeless, those who have lost their jobs due to the pandemic and senior citizens.

Of course, the Metropolis helps its own as a top priority, Sianis says, but now, it has broadened its charitable reach to include those from all walks of life, allocating its precious resources for not just the Greek Orthodox but all others as well.

“We needed something that would connect us to the outside,” Sianis explains. Now, the entire Metropolis is “working with our brothers and sisters outside the faith. We work together side by side. We’re all brothers and sisters, and that’s what’s important.”

To learn more about Project HOPE, including partnership and volunteering opportunities, please email them at HOPE@chicagometropolis.org or visit the Project HOPE webpage, here.