Thousands of Greeks and philhellenes from all around the world will tune in this Thursday, November 12, to watch and participate in a celebrity-filled gala event and auction hosted by The Hellenic Initiative in support of Greek causes.

The auction and virtual 2020 Gala is aiming to raise awareness and provide crisis relief for Greek businesses and entrepreneurs who took an economic hit from the pandemic this year.

Participants can help by donating items to be sold in an online auction running through Thursday, November 12 at 7 pm EDT / 12 midnight GMT. 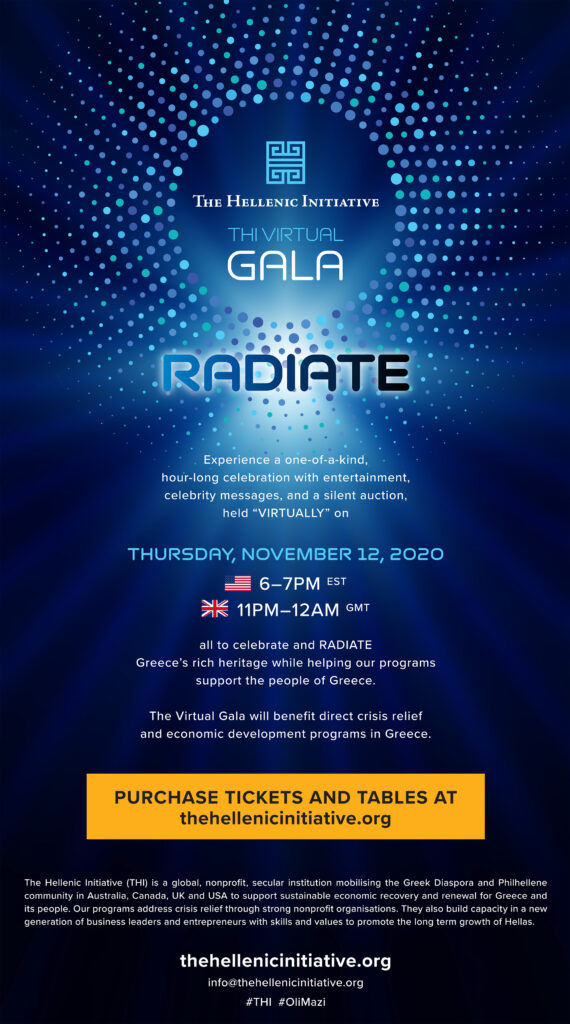 The auction kicks off in advance of The Hellenic Initiative’s (THI) 8th Annual Gala on November 12, which will be virtual for the first time ever, due to COVID-19 restrictions.

THI has organized luxurious and enticing auction items that, particularly this year, focus on giving to those in need.

The event, which will be hosted by Greek performer and television personality Sakis Rouvas, will include special performances and messages from:

· Monika, one of Greece’s most acclaimed indie artists;

· His Eminence Archbishop Elpidophoros of America;

Greek Prime Minister Kyriakos Mitsotakis will also send a message to the audience.

“We have had an incredible response from members of the Greek Diaspora and philhellenes around the world,” THI Executive Director Peter Poulos told Greek Reporter.

He noted that THI had organized several galas in support of Greek causes in the last several years, but as he pointed out, this time around it was different organizing a virtual event.

“We were in uncharted waters, but people showed enormous support Poulos said. “Until now (Monday), THI has raised $1.3 million and we are on course to meet our target of $1.5 million by Thursday,” he added.

“Many Greeks, wherever they are, have a passionate commitment to supporting their homeland. Our Annual Gala is simply a vehicle for Greeks to raise funds that help the place from which they came.”

Poulos noted that although many countries across the globe were hit hard by the pandemic, Greece was particularly affected due to the collapse of the tourist industry.

“Officially tourism contributes around 25% of Greek GDP. However, more realistic estimates put this up to 40%. The pandemic travel restrictions ravaged Greece’s all-important tourism industry — a sector which is normally recession- and disaster-proof,” Poulos told Greek Reporter.

The 8th Annual Gala, titled “Radiate: The Hellenic Initiative Virtual Gala” is a call-to-action that will illuminate a Greece of innovation, strength, and resiliency by telling the business success stories of THI’s many grantees.

Founded in 2012, THI is a global, nonprofit, secular institution mobilizing the Greek diaspora and philhellene community to support sustainable economic recovery and renewal for the Greek people.

Since 2012, THI has committed or distributed $5.7 million in direct crisis relief and $10.1 million in economic and entrepreneurial development.

Tickets for the event

Replacing the in-person fundraisers THI has hosted over the previous seven years in New York, and four years in London, the ticketed event will take place on Thursday, November 12, in New York at 6 PM–7 PM EST and simultaneously in London at 11 PM–12 AM.

PRESS RSVP: Virtual admission is free to credentialed members of the press. Upon acceptance, an online link will be forwarded prior to the event.

A 2,300-year-old tomb in southwest Turkey—once revered as a holy Islamic site—turns out to be the tomb of ancient Greek boxer Diagoras.
Europe