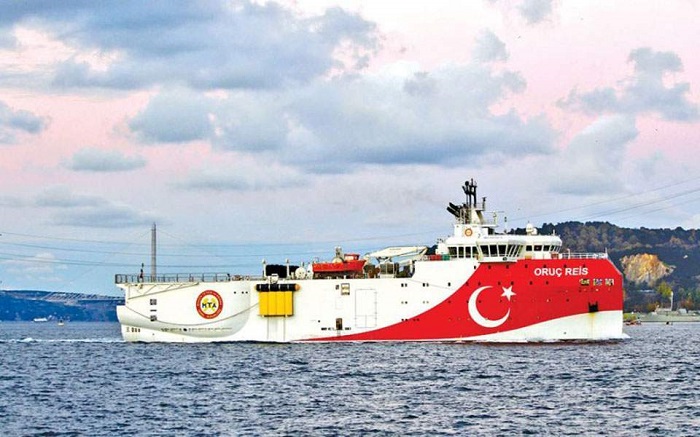 Turkish authorities announced on Tuesday that a drilling ship is to conduct explorations in the sea area south of the Greek island of Kastellorizo in the southeastern Aegean.
Ankara, which disputes that the island has a continental shelf and its own Exclusive Economic Zone (EEZ), is sending the Oruc Reis drilling ship to the area.
According to an announcement by the Antalya hydrographic service, the vessel will conduct explorations starting on Tuesday which will last until August 2.
Greek PM Kyriakos Mitsotakis warned that Turkey is threatening to violate the sovereignty of Greece and Europe.
“Greece is following the developments with confidence and absolute readiness. The questioning of the sovereign rights of Greece and Cyprus constitutes a questioning of the sovereign rights of Europe. If Turkey continues in this direction, the imposition of sanctions by the EU will be a one-way street,” the prime minister said.
Defense sources in Athens fear that Turkey plans to ignite a general crisis in the Eastern Mediterranean.
Such a crisis, they say, would aim at preventing the creation of an EEZ demarcation agreement between Greece and Egypt which is now on the negotiating table. In addition, they add, Ankara wants to exploit the perceived policy vacuum in the US which is heading toward its upcoming presidential elections.
Earlier on Tuesday Greece’s foreign minister said that the illegal behavior of Turkey in the Eastern Mediterranean was threatening the cohesion of NATO and Ankara’s relations with the European Union.
“The illegal and provocative behavior of Turkey has a serious backlash not only to peace and stabiity in the Eastern Mediterranean but to the cohesion of NATO and to its relations with the European Union,” Greek Foreign Minister Nikos Dendias said after a meeting with his German counterpart Heiko Maas in Athens.