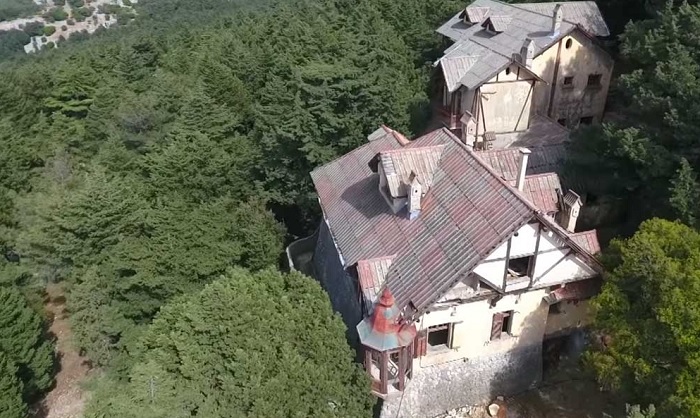 The Hellenic Republic Assets Development Fund (HRADF), responsible for raising money from state property sales to reduce debt, placed the abandoned Villa de Vecchi on the Greek island of Rhodes, which had been the holiday home of Italian dictator Benito Mussolini, on the market in 2014.
And amazingly, it is still on the market today.
More than half a century later, Greece is offering a 50-year lease on the property, built by Count Cesare de Vecchi, an adviser to Mussolini, from 1936-47. Mussolini never actually spent summers there, as was the original intention, but Vecchi himself lived in the Italianate mansion when he was governor of the Dodecanese Islands, until 1947.


The islands had been under Italian control since 1912, when they were ceded to them from the Ottoman Empire.
Abandoned since the Dodecanese islands were ceded to Greece in 1947, graffiti is now scrawled over the walls and fireplaces of the two-story stone and wooden structure. The villa, is located on Profitis Elias Hill, near Rhodes’ east coast village of Archangelos, just 25 km from the capital of Rhodes.

Some say that the building was deliberately allowed to fall into disrepair as a permanent reminder of the Count’s purported cruelty to the local people and of Italy’s failure to “Italianize” the Dodecanese.
It faces the Elafos and Elaphina Hotel, built in the Alpine style, which serve as additional examples of the fascist dictator’s plans for Rhodes to be an outpost of an Italian empire.
The mansion amazingly still has its original chapel, built a distance away, its stained glass windows incredibly still intact.

Its wood-framed French doors, running the length of a wall in the main living room still frame the jaw-dropping views over the island of Symi and the Turkish coast.
Along with the villa, 13 other properties not in use are being offered as prospective small luxury hotels. Three of them are for sale only, while the remaining ten are offered for lease for 50 and 99 years.
“There’s been a significant shift in investor sentiment on real estate assets in the past 12 months, both globally and locally,” Andreas Taprantzis, executive director for real estate at the Athens-based fund, said in an interview to Bloomberg news agency when the property went on the market in 2014.
“The only criterion is the highest bid per asset,” he stated.
With 80,000 properties on its books — from a castle in Corfu and a former U.S. Army base in Crete to a historic building in Washington’s Embassy Row — real estate sales of state property were expected to rake in half of the original target of 50 billion euros by the end of 2015 in order to repay loans Greece has received from the European Central Bank (ECB) and the International Monetary Fund (IMF).
Projections for asset sales now stand at 22.4 billion euros through 2022.
Meanwhile, Taprantzis counters arguments that Greece is selling its heritage. Properties like the Villa de Vecchi have been “hidden, buried,” he noted.
“Now there’s a perfect opportunity to showcase them, not just for Greeks but to foreign visitors,” he said, adding that “No one is going to pick up the building and take it with them. The investment will contribute to the upgrade of our tourism product and will create new jobs.”