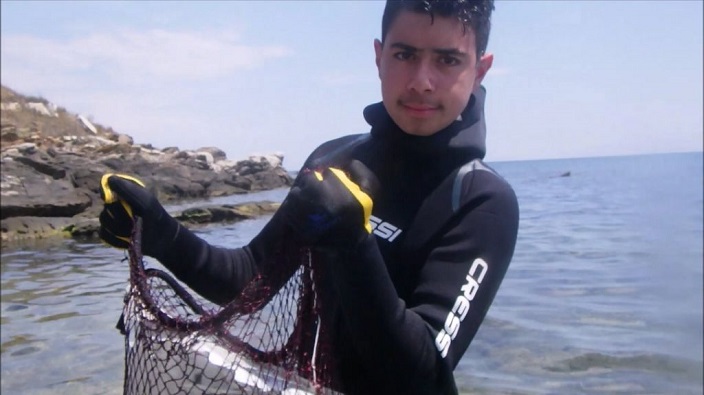 Thirteen-year-old Zisis Vagousis has dedicated several years of his life to cleaning coastal beaches, with his goal being to remove harmful plastic waste from the seabed.
In an interview with 104.9 FM Athens Radio, the young teenager explained the reasoning behind his dedication, saying that “What made me take action, along with my father, were the dead turtles on the beaches.”
Vagousis began to systematically clean the seabed at the age of seven, while his father taught him how to swim at three-years-old. When he had seen the dead sea turtle, Zisis wondered what he could do in order to prevent animals from dying due to pollution.
According to the thirteen-year-old, it was his father, Michalis Vagousis, who became a major example to the teenager and initiated him into the wonderful world of the sea.
During the start of the summer and before winter would come with its harsh weather, the father and son duo would be at sea every day in order to find garbage to collect.


“Wherever we find garbage, nets and other fishing equipment or various other objects in our area, we take them out of the sea. If it’s a larger quantity, we even dedicate our whole day to this purpose,” said Michalis Vagousis.
The pair have even reported to finding other items besides typical garbage, including motorcycle tires and even vehicle parts at the bottom of the seabed.
During one such expedition, Zisis Vagousis and his father found a drone that the actual owner was able to recognize when they uploaded a video of them finding it onto YouTube. Due to the damage making it unrepairable, however, the person no longer wanted it.
Zisis’s continued actions recently won him 1st prize in the “Environment” category at the “You Smile Awards,” organized by “Child’s Smile.”
On Vagousis’s YouTube channel, one can watch moments of the father and son’s continued fight in eliminating maritime pollution and improving the environment.