Mexico was hit on Tuesday by an earthquake centered in the Pacific coastal state of Oaxaca and with tremors being felt across the country.

The quake, which took place mid-morning, had a frightening magnitude of 7.4. According to the United States Geological Survey, the impact reached a depth of 26 kilometers (16 miles), leaving buildings across the area shaking, and destroying paved roads.

The city of Oaxaca shows damage to old buildings in the downtown area after the earthquake this morning.

Governor Alejandro Murat stated that one person had died in Oaxaca during the earthquake while huge numbers of citizens in the state are currently trying to find safe places to stay. 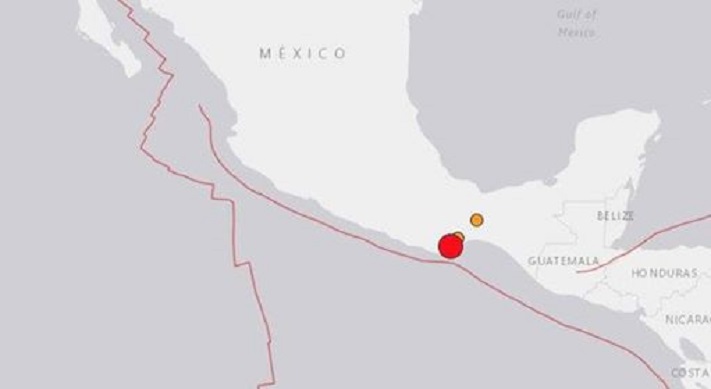 Authorities have also issued a tsunami warning for Mexico, Honduras, El Salvador and Guatemala following the earthquake. According to authorities, coastal tsunami waves could be triggered due to the 1,000 kilometer (621 mile) radius of the epicenter.

One video posted on Twitter clearly showed the ground moving due to the earthquakes, with one user commenting how it looked as if the street was lying atop water.

A tsunami warning for Mexico, Honduras, El Salvador, Guatemala, and the greater Pacific coastal area was issued following the earthquake. According to authorities, coastal tsunami waves were triggered due to the 1,000 kilometer (621 mile) radius of the epicenter.

People near the site in Mexico were instructed to stay away from the shoreline, since tsunami waves were expected to hit the area. According to the U.S. National Oceanic and Atmospheric Administration, waves could reach over 1 meter above normal tide levels.

Helicopters which flew over the Roma and Condesa districts of the capital city reported to show no fallen buildings or any substantial damage from the tremors.

The U.S. Geological Survey later specified that the epicenter of Tuesday’s earthquake was located 69 km (43 miles) northeast of the town of Pochutla.

While damage surprisingly appears to be fairly minimal, Mexico still shows remnants of the enormous damage from the 2017 Puebla earthquake, which struck near the city of the same name with a magnitude of 7.1 and caused massive destruction across the country.