A Greek professor is compiling an enormous online archive of historic Cycladic Island music, representing the first-ever systematic study of all music known to have been played on these Aegean islands.

In this groundbreaking academic study of all vocal and instrumental music played in the Cycladic Islands of Amorgos, Schinousa, Donousa, Iraklia, Koufonisia, and Keros, located in the Aegean Sea, southeast of the Greek mainland, Panagiotis Liaropoulos, 52, will present his seminal collection of all relevant audio-visual materials, the fruit of years of diligent work.

Liaropoulos, born in Athens, is currently a faculty member in the Composition Department at Berklee College of Music, in Boston. The professor was also a recipient of a prestigious Fulbright Scholar Award in 2018.

The Greek-born researcher also serves as the founder and music director of the Greek Music Ensemble, a Boston-based musical group which performs several genres of Greek music.

Liaropoulos is a lone pioneer in the study of these islands’ music, almost singlehandedly compiling a priceless database of music history for this Greek island chain – sometimes referred to as the “Small Cyclades.” He has worked since 2018 to compile, among other things, an astounding 500 songs which have been part of everyday Cycladic island life since the mid-1800s.

Recorded music he has compiled amounts to an astounding 54 hours of music, which are stored on a total of 62 CDs. The professor’s collection also includes 600 photographs of music-related activities on the islands, dating back to 1910, along with 20 hours of video, focusing on island music which has been performed since 1980.

He notes that the songs he has collected provide a historical window into the lives of island residents. “The songs chronicle the everyday lives of the people: their sorrows, their joys, what they do… fishing songs and migration songs, sailor songs and hunting songs — and even pirate songs,” adds Liaropoulos. 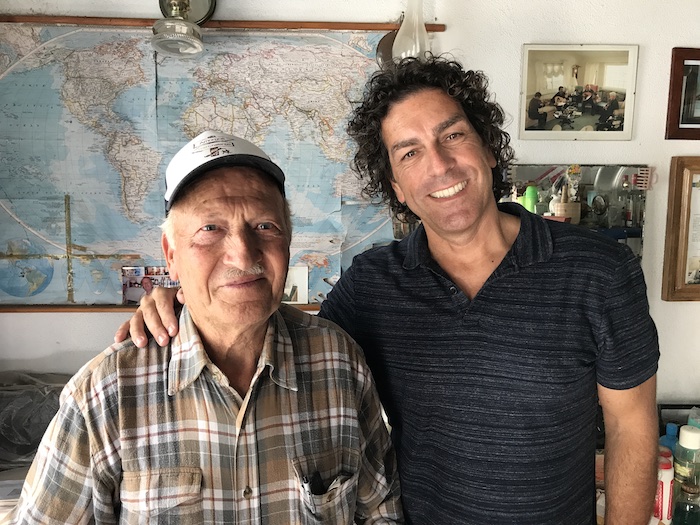 “One very important element in the research are… the lyrics. There are 500 songs that I have collected, and there are probably many more out there. And the two-verse rhymes collected amount to about 10,000 at the moment,” said Liaropoulos.

Unsurprisingly, the Berklee professor has observed the cross-fertilization of cultures influencing the music which developed on the islands. “All the other islands in the Aegean, the mainland, even Istanbul and the shores of Asia Minor seem to be influencing both Greek culture, in general, and also the culture of those islands,” said Liaropoulos.

The music professor also suggests that the shared influences found in the songs were brought to the islands through sailing. “These places have been inhabited for the past 9,000 years and they have a long tradition of sailing and working with commerce.

“So, there are stories of people who were sailing from the island of Amorgos to Asia Minor and then back, and also to Crete and the Dodecanese and back, and all these people have been bringing those musical and cultural influences from these places and the other way around,” he explains. It is a cultural cross-fertilization that has been happening for centuries, and is actually still happening,” he added.

Among Liaropoulos’ findings has been that Cycladic music not only has its own characteristics on each island, but also within separate villages on the islands.

“The entire Aegean shares common characteristics in the way music is being done — their repertoire. But every place — not only every island but even villages and communities on those islands — have their own particular, nuanced way of doing things.

“In the large picture, they basically share the same principles… but the way that they do things, the stylistic details, they seem to be particular, not only from island to island, but even within the islands themselves,” he says.

Liaropoulos notes that he has been pleasantly surprised by the acceptance of the island people to his being among them, as well as for their concerns about preserving their musical heritage.

“I was not expecting people would be so open — they dedicated hours of their personal time to me, gave me their personal photos, tapes, and other materials related to music. I think it is the fact that I had cultivated personal relationships among a lot of these people, especially the musicians, through the years, so they trusted me.

“I was even surprised with the degree of openness that I found. People shared their own personal stories, the stories of their fathers and grandfathers and mothers and children” he states.

Liaropoulos anticipates he needs two more years to catalogue, digitize and properly organize the material in his enormous collection, but it will then be available online as one resource for everyone in the world to enjoy. It will undoubtedly serve as an important landmark in the study of folk music and ethnography worldwide.

A 2,300-year-old tomb in southwest Turkey—once revered as a holy Islamic site—turns out to be the tomb of ancient Greek boxer Diagoras.
Greek News