The Resurrection of St. Nicholas Greek Orthodox Church on ’60 Minutes’ 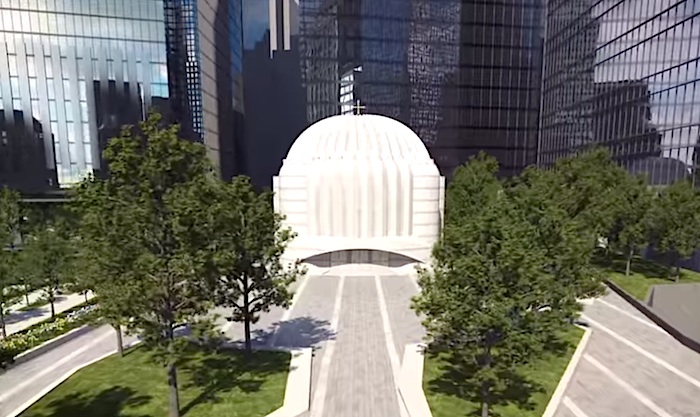 60 Minutes correspondent Scott Pelley visited Greece for the interview and also interviewed Santiago Calatrava, the architect of the project. Former Archbishop Demetrios was also interviewed in the segment.

“We are very moved that the longest-running and most prominent television news program in the United States is highlighting our campaign to rebuild Saint Nicholas during this holiest time of the year,” said Archbishop Elpidophoros of America.

The archbishop said that Orthodoxy is looking forward to the opening of the doors of Saint Nicholas Greek Orthodox Church and National Shrine, slated to occur on September 11, 2021.

Despite a price tag that might exceed 81 million dollars and a turbulent background that involved accusations of financial mismanagement, “now the construction of Saint Nicholas Shrine is on the right track and the church – once finished – will be the most visited Christian structure in New York City,” said Michael Psaros, the Vice-Chairman of ‘Friends of Saint Nicholas’ the new organization overseeing the realization of the project, in a recent interview with Greek Reporter.

Speaking to Greek Reporter, Psaros, who wants to leave behind the many delays in the project and accusations of mismanagement and theft in the Greek Orthodox Archdiocese of America, noted that “once completed, the Greek Orthodox shrine “would be the single most-visited church in New York — and maybe in the U.S.”

The 60 Minutes report also highlighted the financial scandals that led to the firing of numerous officials at the Greek Orthodox Archdiocese of America.

Psaros told Greek Reporter that “The project stopped under the old management because it was not professionally managed… Whatever happened before, it happened.”