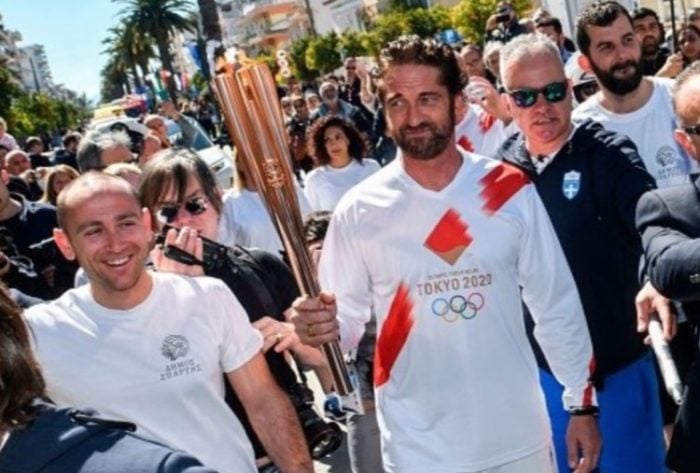 For the last couple of weeks Scots actor Gerard Butler has been quarantined in Sparta, after arriving in the area to present to carry the flame for the 2020 Olympic Games torch relay.

As lockdown rules went into effect and the country’s borders shut down almost at that very moment, Butler was forced to stay in the region in order to self-quarantine. Famous for playing King Leonidas in the epic movie “300”, Butler seemed more than happy to be asked to stay in Sparta.

Sources in the area now say that there may be another reason keeping the action star in Sparta.

Apparently, a few days before Butler ran with the Olympic torch, he met a local 28-year-old woman named Toula Sidiropoulou. She runs a successful local bakery and her family is somewhat well-known in the area, as her father was a former decorated soldier and lightweight boxing champion.

Butler, renowned for being a down to earth man himself, quickly bonded with Toula and apparently fell head over heels for her. When he was forced to isolate in Sparta, the pair decided to quarantine together at a local mountain cottage the actor rented, to see if the relationship could truly work.

Now that both Butler and Sidiropoulou have ended their two week quarantine and appear asymptomatic, they made the momentous decision to get married!

The ceremony was extremely small and intimate, with just a priest present and Toula’s two brothers as witnesses. Her parents gave their blessings, although they decided not to attend the ceremony since they are in a high-risk group for coronavirus and are staying indoors for the time being.

Although we do not yet know if Butler plans to establish a permanent residence in Greece to be closer to his new bride’s homeland and family, or bring his wife to Los Angeles, we are excited to see what the future holds for them. Congratulations to the happy couple and Happy April Fool’s! Opa!