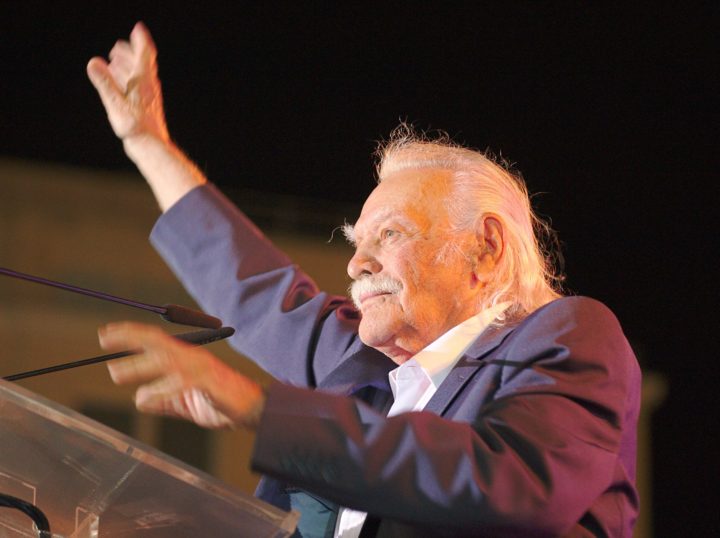 Second World War Resistance fighter turned politician Manolis Glezos passed away on Monday at the age of 98.
Glezos is best remembered for his heroic act, together with Lakis Santas in 1941, of climbing Athens’ Acropolis Hill at night and taking down the Nazi swastika flag flying there early the next morning, dealing a powerful symbolic blow to the powerful occupying forces.
This incredibly courageous move later proved to be just the beginning of the great Greek resistance to the Nazi terror.
It was a gallant act, an act of proud defiance, which ultimately raised the spirits of all the Greek people and made them believe that they could indeed resist the Nazis despite their military might.
It was a clear demonstration of the indomitable power of the human spirit against the power of guns.

The Start of Greek Resistance to the Nazis

On May 30, 1941, two young men made a heroic move that later proved to be the beginning of the great Greek resistance to the Nazis

Posted by Greek Reporter on Wednesday, 30 May 2018

Born in the village of Apiranthos (Aperathu), Naxos, Glezos moved to Athens in 1935 together with his family, where a few years later he participated in the creation of an anti-fascist youth group opposed to the Italian occupation of the Dodecanese and the dictatorship of Ioannis Metaxas.
Glezos asked to join the Greek Army along the Albanian front to fight against Italy at the onset of World War II, but he was rejected because he was underage. During the Axis occupation of Greece, he worked for the Hellenic Red Cross and the municipality of Athens, while still being actively involved in the Resistance.
The end of World War II was not the end of Glezos’ tribulations, however. On March 3, 1948, in the midst of the Greek Civil War, he was put on trial for his political convictions and sentenced to death multiple times by the national government.
His death sentence was reduced to a life sentence in 1950. Despite still being imprisoned, Glezos was elected as a member of the Hellenic Parliament in 1951, under the flag of the United Democratic Left, also known as EDA.
Over the course of four decades, Glezos had been imprisoned numerous times by the Germans, the Italians and then by Greek rightwing and military governments, and was even tortured and put in solitary confinement.
“They say to survive in prison you should love yourself, eat and read. Well, I never loved myself, I didn’t care about food — but I constantly read,” he told the Financial Times in 2016.
After the restoration of democracy in Greece in 1974, Glezos participated in the revival of EDA. He was elected a member of the Greek Parliament on a Panhellenic Socialist Movement (PASOK) ticket in the elections of October, 1981 and June, 1985.
In 1984 he was elected Member of the European Parliament, again on a PASOK ticket.


Glezos was elected as an MP for the Coalition of Radical Left (SYRIZA) party in Greece’s June, 2012 parliamentary elections.
He also served as a SYRIZA candidate for the European Parliament in the elections of May 25, 2014. He was elected to that body with over 430,000 votes, receiving more than any other candidate in Greece.
At age 91, the Resistance hero also became the oldest individual ever elected to the European Parliament in the 2014 elections.
Glezos publicly apologized in January of 2016 for having trusted Prime Minister Alexis Tsipras after the government negotiated a painful third financial bailout. The political veteran remarked at that time “I’m not disappointed, I’m furious.”