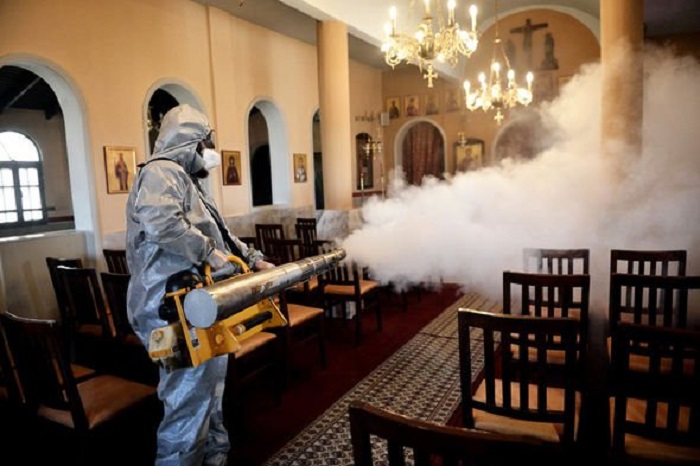 Greece’s early response to the Coronavirus pandemic has been praised by international experts as well as many media outlets. We asked an international health expert and a Senior Lecturer in Public Health at Imperial College, Filippos Filippidis, to asses Greece’s response.
The early recognition of the severity of the coronavirus epidemic “allowed Greece to have a relative effective early response,” he says.
In an interview with Greek Reporter, Filippidis notes that it is a good sign that Greece has not yet experienced an exponential increase in hospitalizations and deaths, but he stresses that “this is only the beginning of the battle against the coronavirus.”
The Greek scientist, who studied medicine at the University of Athens and earned an MPH from the Harvard School of Public Health, underscored the challenge the country will be facing in the months to come since, as he points out, social distancing might be difficult to maintain during the Greek summer.
Read the full interview below.
Q: Has Greece acted early enough to stop the spread of the coronavirus? What else, if anything, do you think it should have done?
Greece was — in a sense — lucky because the Italian drama is taking place in a country which is close and familiar and feels quite similar to Greece. China suffered earlier, but few countries in Europe took it seriously, maybe because China was “too far away” and “too different.”
When the outbreak started in Italy, Greek authorities understood the severity of the threat and were quick to act — in many aspects, faster than the majority of European countries.
When a cluster of victims who had visited the Middle East was discovered in Western Greece, contact tracing worked quite well, which also helped to contain the spread of the virus early on.
In retrospect, we can identify gaps in the implemented policies, but overall, I think early recognition of the severity of the epidemic allowed Greece to have a relatively effective early response.


Q: Do the latest data show encouraging signs for Greece, or is it too early to make predictions?
Greece has not yet experienced an exponential increase in hospitalizations and deaths, which is a good sign. This has allowed the country to prepare for the next stages of the epidemic.
However, we all need to realize that this is only the beginning of the battle against the coronavirus. Suppressing the initial outbreak buys countries time, but the following stages will be equally important.
I would say that Greece seems to have avoided a catastrophic outbreak, unlike Italy and Spain for example, but things can get much worse quite quickly, so vigilance is essential. Virus transmission can be exponential without the appropriate measures, so it’s not unlikely that the health system will be overwhelmed at some point.
Q: What do you think of the Greek approach to coronavirus tests? Maybe it should test everybody? Is this feasible or effective?
Ideally, we would test as many people as possible, which would give us an accurate picture of the current situation. However, this would only be a snapshot of the population. Those who test negative could contract the virus at any point and we can’t keep doing it continuously.
Testing is crucial in order to identify and isolate those who can transmit the virus, so it’s an essential tool, but I am not aware of the capacity to perform mass testing in Greece. As soon as antibody tests, which can also identify those who have recovered, become available, I suppose that Greece will scale up testing.
Extensive testing seems to be necessary for the next stage of the epidemic, if we wish to avoid these draconian restrictions in social life and travel.
Q: What are Greece’s strongest assets and the weakest links in the battle against coronavirus?
Greece’s public healthcare system is chronically understaffed, which is a major obstacle in dealing with hundreds or thousands of cases requiring hospitalization. Although efforts to employ more doctors and nurses are underway, it is unlikely that these will address the staffing problems.
Greece’s geography might also play a role. On one hand, a small cluster of cases can be easily contained on a small island or in a mountainous village, for example. However, hospitalization, testing and contact tracing might be challenging in such remote areas.
Another concern I have is that social distancing might be difficult to maintain in the summer. People will get tired of it, and staying at home is harder during the Greek summer. Hopefully, the epidemic will have been suppressed by then and restrictions won’t need to be so strict.
The big advantage of the country at this stage is that it has bought a bit of time to learn from other countries. There are excellent scientists and doctors in Greece who will pick up and apply the most effective treatments, as these are being tested elsewhere in the world. I also get the sense that, for once, the country is largely united, which is very important at times of crisis.
Q: After China, Italy and Spain how likely is that the U.S. will become the next hotspot in the pandemic?
The US initial response was, in many aspects, the opposite of Greece’s. The president downplayed the threat and valuable time was lost. As a result, the US is currently facing a great challenge.
It is of course a country that can utilize vast resources and the response is being scaled up, as we see with testing now, but there is no more time to be wasted. The next few months will be challenging and the way the healthcare system and market works in the US does not make things easier. We already see a surge in cases and deaths in places like New York, so I do expect that there will be many deaths and huge pressure on the hospitals within the next couple of months.
Compared to European countries, US has the disadvantage that large parts of the population are vulnerable and with inadequate access to healthcare. They might face a greater risk, so they need to be protected, which I know is not as obvious as in Europe.