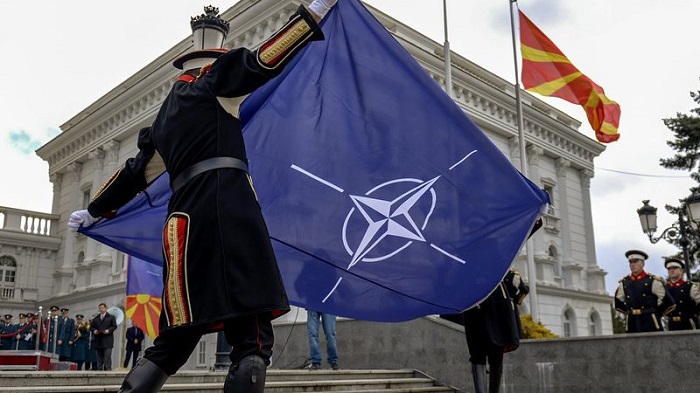 The Greek Foreign Ministry congratulated the Republic of North Macedonia on officially becoming a member of NATO in a tweet posted on Friday.
“We congratulate the Republic of North Macedonia that joins NATO as the 30th member of our alliance. We welcome our neighbors to the NATO family & look forward to working together as allies #WeAreNATO,” it said.
North Macedonia’s membership is linked to the Prespes Agreement, signed with Greece in June 2018. Respecting the agreement’s terms was a prerequisite for the country’s membership in NATO and the EU.
The NATO alliance invited North Macedonia to join in July of 2018, pending ratification by the national parliaments of other NATO members, while EU foreign ministers have also initiated the process toward the start of accession talks for acceptance into the Union.
Speaking in Brussels on Friday, NATO Secretary-General Jens Stoltenberg said in a statement, “North Macedonia is now part of the NATO family, a family of thirty nations and almost one billion people. A family based on the certainty that, no matter what challenges we face, we are all stronger and safer together.”
The statement added that “North Macedonia is a long-standing contributor to our Euro-Atlantic security, including by participating in NATO-led missions in Afghanistan and in Kosovo,” and said the flag-raising ceremony would take place at NATO headquarters on March 30.
In a tweet, US Secretary of State Mike Pompeo said “Today, we welcome North Macedonia into the NATO Alliance as our 30th Ally and celebrate their commitment to the North Atlantic Alliance. We reaffirm our commitment to collective defense under Article 5, the cornerstone of the Transatlantic Alliance.”
(Source: AMNA)