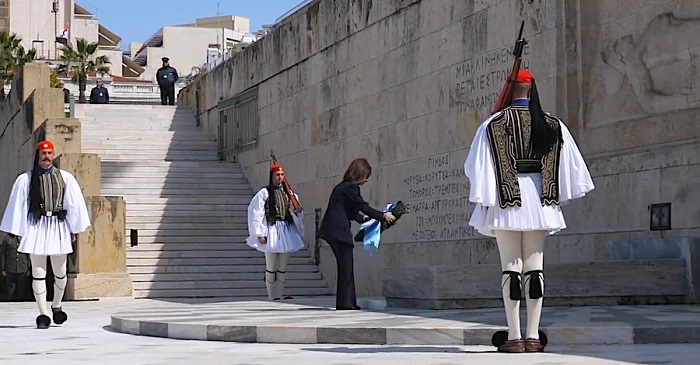 A handful of politicians led by President of Greece Katerina Sakellaropoulou, PM Mitsotakis and leaders of opposition parties, together with the top leadership of the country’s armed forces, marked the anniversary of the War of Independence in central Athens on Wednesday.
As the country is under lockdown fighting the spread of coronavirus, the traditional laying of the wreath ceremony at the monument of the Unknown Soldier was scaled-down at Syntagma Square opposite the Parliament building. 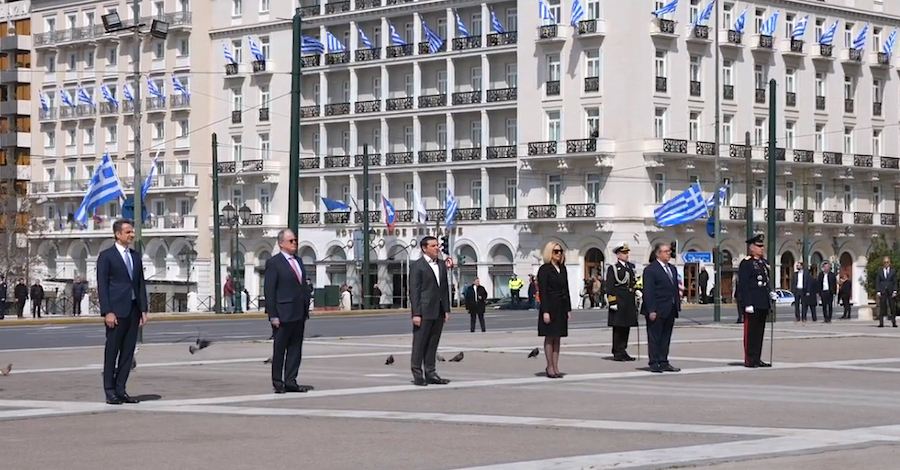 A handful of fighter jets and helicopter flew over Athens reminding Greeks of the heroic 1821 revolution when the nation began its liberation struggle against the Ottoman Empire.

Usually the anniversary is marked with a grand military parade, with thousands filling the streets holding Greek flags. But not today. Greeks stayed at home, just as instructed by the authorities, watching the proceedings from their television sets.
President Sakellaropoulou said that although the nation won’t hold any parades this year, ”we are witnessing parades of our everyday heroes,” referring to the armed forces, the military, doctors, nurses and ordinary workers, who ”sacrifice without the expectation of any benefits or recognition.”
In his message celebrating this day, Prime Minister Kyriakos Mitsotakis said: “The enemy is now the pandemic and against it we will parade our strength and unity.”

Turkish President Recep Tayyip Erdogan referred to the Aegean Sea by the name “Sea of Islands”, as he continued his provocative rhetoric against Greece.
Greece