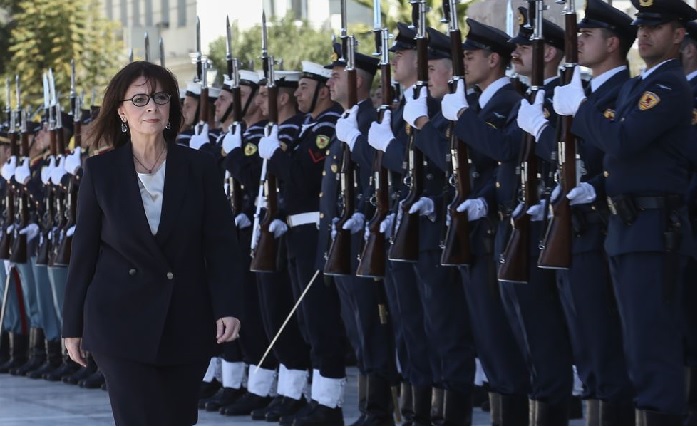 Katerina Sakellaropoulou was sworn in on Friday as the first female President in Greece’s history as the country grapples with the coronavirus scare.
Sakellaropoulou, a 63-year-old senior judge, is now the new Greek head of state and sill serve for a five-year term.
She took her oath in Parliament, where only representatives from political parties were invited to attend as a precaution against the pandemic. Later she laid a wreath at the Tomb of the Unknown Soldier – Greece’s foremost military monument – and she is expected at the presidential mansion for a handover ceremony with outgoing president Prokopis Pavlopoulos.
Sakellaropoulou was elected by Parliament in January by 261 out of 300 lawmakers, one of the broadest cross-party majorities in Greek history.
She has set out her priorities to be tackling the economic crisis, climate change and mass migration.
The new President was until now the head of Greece’s top administrative court, the Council of State.
Who is the new President
Sakellaropoulou was born in Thessaloniki in 1956 and completed her studies at the University of Athens Law School in 1978.
She also completed her legal training during a leave of absence from her Council of State (Greece’s Supreme Court) duties at the Sorbonne, Paris II University between 1989 and 1990.
Sakellaropoulou was promoted to head of the Council of State in October of 2018, proposed by the ruling SYRIZA administration of that time.
She has extensive experience in teaching, as well as an educational and Foreign Ministry consultant, and as an officer of the judges’ union.
The longtime judge has served as President of the Hellenic Society for Environmental Law since 2015, and has actively worked on large cases involving the environment, including the diversion of the Acheloos River in Thessaly and the preservation of the historic refugee buildings on Alexandras Avenue in Athens.
An author of several books, the distinguished jurist also speaks English and French.
Regarding her personal life, Sakellaropoulou is divorced and a mother of one, and she lives in central Athens.
Related: Greek President Sakellaropoulou’s First Remarks After Landslide Election