New Face of Athens' Omonoia Square Ready to be Unveiled

By Philip Chrysopoulos
February 20, 2020
Facebook
Twitter
WhatsApp
Linkedin
Email
Athens Mayor Kostas Bakoyannis posted a panoramic view photo on Facebook on Thursday showing the new visage of the city’s historic Omonoia Square, which is almost ready to be presented to Athenians.
The popular fountain that had once been the hallmark of the square but had been missing from its most recent incarnations is now back, and will be illuminated by colorful lights.

“I am very pleased that Omonoia Square is in the final stretch and will be delivered to the residents of Athens soon. Let’s fall in love with it again,” Bakoyannis commented in his post.
The renovated Omonoia Square covers an area of 4,500 square meters (more than 48,438 square feet) and will once again include a fountain, a feature that had been its highlight until 1992. 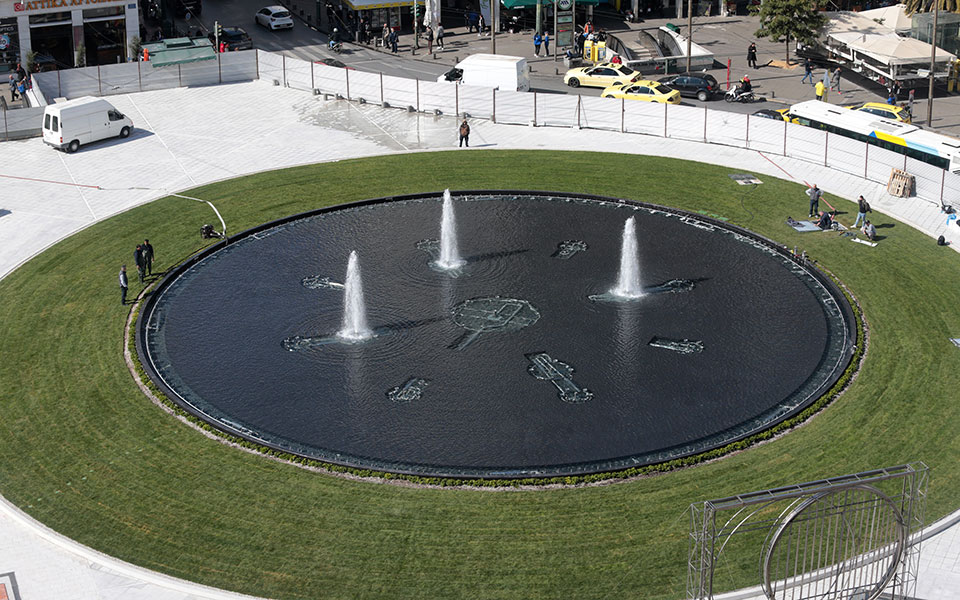 Athenians loved the fountain, and many sports fans had jumped into it to celebrate victories throughout the years. However, the popular water feature was removed in 1992 due to construction which was carried out for improvements to the Athens metro system, leaving many residents of the capital unhappy.
The revamped Omonoia Square will be illuminated by LED lighting fixtures, and will be decorated with an array of plants and new shade features. A new type of pavement will also be laid down there. In an important break from the past, all the new features and materials will be friendly to the environment.
The project is a far cry from previous alterations which had made the square unrecognizable to Athenians, who began to abandon the area beginning in the late 1990s. The culmination of the decay of the square came with the economic crisis, with the final blow to the area given when the immigration crisis made it a hangout for migrants and criminal elements.
Once the commercial center of Athens, Omonoia Square had become a place where many Athenians were afraid to visit at night or avoided altogether, even during the daytime.
With the restoration of the square and the renovation and repurposing of surrounding buildings, municipal authorities aim at reviving the entire area. Mayor Bakoyannis has stated numerous times that he believes the new Omonoia Square will soon be back to its former glory.
The history and many faces of Omonoia Square
The plot where Omonoia Square was to be built was allocated in 1846 and construction started the same year. It was first named “Palace Square” and then “Otto Square,” after the first King of Greece.
The area was renamed Omonoia (“Concord”) Square in 1862, after the two rival political factions of the time shook hands for the good of the homeland, following King Otto’s dethronement.

The square was illuminated by gas lamps in 1877.
In 1895, the Athens-Piraeus underground train station was built; ever since that time, Omonoia Square has been considered the center of the Greek capital.

The Square changed its shape and became circular in 1930, when florists’ kiosks were added, and the entire area became a commercial hub. It also served as the meeting point for all visitors from the provinces during that era.
In 1954, underground excavations took place in order to house shops and banks underneath the square, while the first escalators were also put into use.

The first major reconstruction of the famed square took place in the 1960s, seeing it reduced in size so that more traffic lanes could circle around it — but a fountain was placed at its center.
In the year 1988, the massive glass sculpture “Dromeas” (“The Runner”), the work of sculptor Costas Varotsos, was installed, only to be moved opposite the Athens Hilton in 1992, when construction work on the Athens metro began.

The latest reconstruction of the famed square, which took place as part of the preparations for the 2004 Athens Olympic Games, was completed just before the Olympics opened that year.
The historic square was yet again fenced off, marking the beginning of construction for its new facelift, in late 2018. As the new millennium progresses, the historic square awaits yet another metamorphosis.