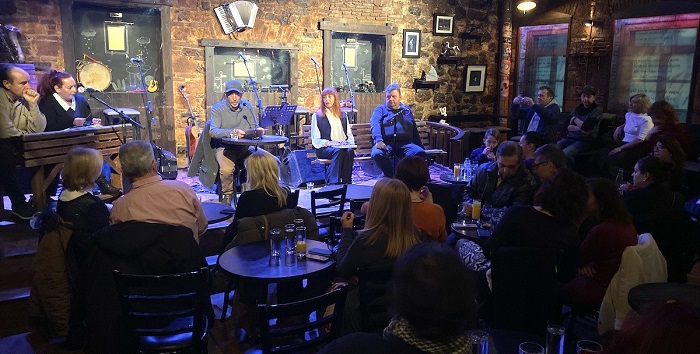 An event held at Chalkida, the capital of Evia, on Sunday honored poet and writer Tasos Papapostolou, who made a significant contribution to the cultural and historic landscape of the island and beyond for more than 40 years.
The event was organized by the Municipal Theater and the group “Association of Friends of Giannis Skarimpas.” Skarimpas was also a prominent Greek writer, dramatist, and poet.
The main speaker at the event was Kostas Bairaktaris, the president of the Association of Friends of Giannis Skarimpas. Actors from the Municipal Theater, including Vaggelis Tsoulalas, Vasia Skoura, Kostas Degiannis and Zoe Livaniou, read excepts from Papapostolou’s works.


The writer and poet was born in 1926 in the village of Agios, near Edipsos. After finishing elementary school in his birthplace, he settled in Chalkida, where he took evening classes to finish high school, since he had to work for a living during the daytime.
He began writing for magazines and newspapers in 1950. He first appeared in the world of Greek letters in 1958, publishing his first collection of poetry. He wrote feverishly from that point onward, leaving behind twenty books.
“Myths, Legends, Traditions,” “A Willow Testament,” “Light in the Tower,” “Breathless,” “An Apron of Red Apples,” “Tama,” “Before it is Too Late,” and “After Ithaca” are some of his most widely-read works.
Papapostolou was awarded by the Academy of Athens for his literary work, and he was also honored by organizations in Germany, the prefecture of Evia and by various other entities during his lifetime. His poems have also been set to music composed by musicians Petros Prokos and George Roussos.
The beloved writer and poet passed away in Chalkida in September of 1996, and the city council there later named a central street after him in his honor.