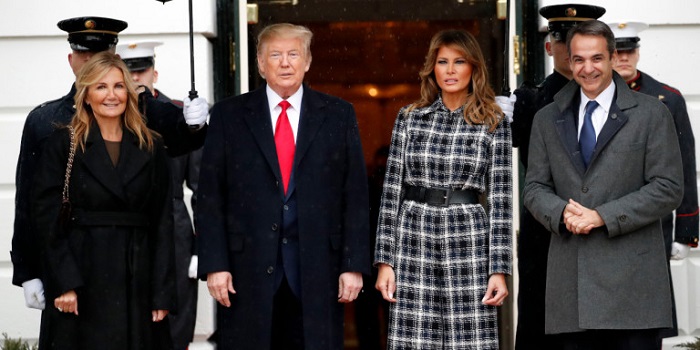 President Trump referred to Greece as a “reliable partner” and congratulated the country for its recent rapid economic development. “Greece and its recovery are a huge success,” the US President underscored.

“The relationship is really extraordinary, I would say. It’s as good as it can get. We’re doing a lot of things together — military. We’re also doing big trade. A lot of trade. And Greece has made a tremendous comeback,” President Trump said.

Mitsotakis agreed, stating that the Greek economy has done extremely well over the past months. “We have lowered taxes. We are deregulating. We’re following a recipe that has also worked here in the in the United States. And the economy is reacting very positively. So we’ll also be looking to your support to convince American companies to invest more in Greece and help us grow the economy at a pace where people are really going to feel the difference.”

The Prime Minister added that Greece is “looking for your constant support, strengthening the strategic relationship. On the defense side, we’ve made lots of progress in terms of making sure that you have a reliable and predictable ally in a complicated part of the world.”

Mitsotakis noted that the recent Turkey-Libya agreement only causes destabilization, and stressed that Greece expects the US’s support on the matter, adding that that his country is an ally the US can rely on. 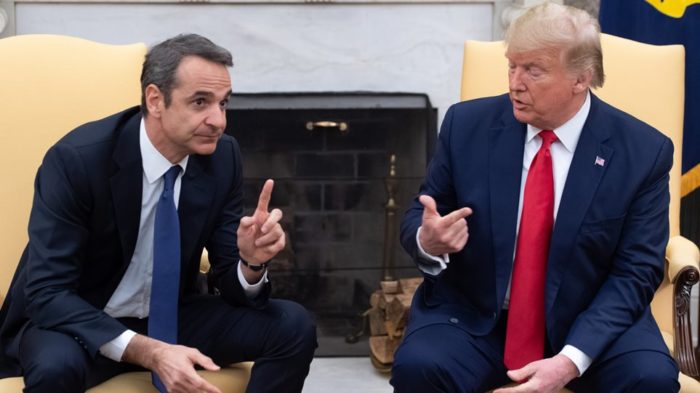 Journalists’ questions for the two leaders mostly focused on the assassination of Qassem Suleimani in Iraq. Trump referred to the Iranian major general as a “monster” and called his death a good thing for most countries. He said that the United States is prepared for all possibilities, including war.

Asked about the possible purchase of F-35 fighter jets by Greece, Trump stated that a number of agreements would be made with the Greek delegation.

The two couples posed together for photos under umbrellas after the car drove off.

President Trump met with Greek Prime Minister Mitsotakis at the White House on Monday. The American president noted that Greece's economy is recovering fast while the Greek PM stressed that Greece will be a reliable ally of the US in the region, at a crucial moment for the US. At the same time Iran was threatening those who might assist the US in case American forces use their bases in the area to attack Tehran or their interests in the Middle East. What are your thoughts on the Trump-Mitsotakis meeting? Full story: https://bit.ly/2tArx3I

Speaking earlier on Tuesday at the Atlantic Council, a think tank for international affairs in Washington, Mitsotakis said that he “arrived (in the US) at a turbulent time, but also at the best point in Greece-US relations.”

Mitsotakis noted how the Greek economy is reacting favorably to the reforms legislated and pursued by his government, underlining the importance of making an early repayment of the country’s loans to the IMF after his government won the July 2019 national elections.

He then referred to the potential purchase of F-35 fighter jets, as soon as the country’s budget allows for it.

The Greek Prime Minister also emphasized how he has always been a firm supporter of the NATO alliance and proceeded to condemn Ankara’s recent policy in the region and beyond.

“I made it clear in London (at the recent NATO Leaders’ Summit) that it is unacceptable for one ally to provoke another ally,” he noted, “yet Turkey continues to provoke, and the issue should be discussed again in the alliance.”

Concerning energy policy, Mitsotakis praised the recent signing of the EastMed gas pipeline agreement in Athens as a milestone in Greek-American relations. He stressed how this is a significant accord not only for Greece and the signatory countries, but also for Europe, as it would cover its energy needs for the next 30 years.

He also said he wanted to make sure that it is clearly understood that no one is ruled out from this agreement, and that Greece does not, as he said, “stand in Turkey’s way.”

Mitsotakis then mentioned that the “Turkey-Libya so-called ‘agreement’ cannot produce anything of legally accepted stature, as it is an agreement legally unfounded, null and geographically absurd,” he noted.

“But we are inclined to keep all communication channels with Turkey open,” the Greek leader added.

“If Turkey agrees that we must resolve our differences over the maritime zones decisively, then we can go to The Hague, but even then the condition is to respect international law and recognize that our only difference in the Aegean concerns the continental shelf.”

Mitsotakis concluded by stressing that “We will not accept any violation of our sovereign rights.”