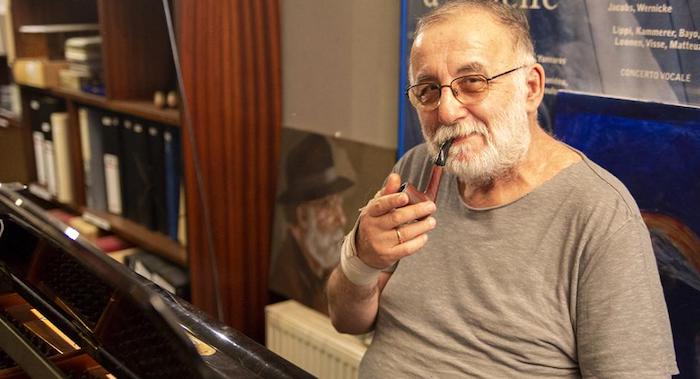 Thanos Mikroutsikos one of the most influential Greek composers of recent decades has died on Saturday at the age of 72.
Mikroutsikos died at the Athens’ Metropolitan hospital where he was treated for cancer.
In his last message on Facebook on December 8, the composer said that he was receiving messages of support form friends worried about his health. “For a month and a half now I am in a hospital room struggling with a persistent fever. I am writing to you today because I feel stronger and I am sure to meet you soon,” Mikroutsikos wrote.

He was born on the 13 April 1947 in Patra.
He studied piano in the Philharmonic Society of Patras and in the Hellenic Conservatory. In addition, he studied Mathematics in the University of Athens.
He began composing at the end of the 1960s but only officially debuted in 1975, with the release of his album Politika Tragoudia (‘Political Songs’). He continued on this compositional path, setting to music the poems of Giannis Ritsos, Vladimir Mayakovsky, Manos Eleftheriou and Bertold Brecht, among others.
The following video is from one of his last concerts at the Theatro Vrachon in the summer of 2018.


His album, Stavros tou Notou (Southern Cross), set to the poetry of Nikos Kavvadias, has been one of the musical landmarks of modern Greece.
He has worked with many renowned singers such as Maria Dimitriadi, Haris Alexiou, Manolis Mitsias, Dimitris Mitropanos, Vasilis Papakonstantinou, Christos Thibaios and Giannis Koutras, among others.
His music has been particularly well received and recognized in Western Europe. During his career, he has managed to liberate the form of Greek song, adding together elements from the modernist and classical western tradition. He also experimented with the combination of tonal and atonal sounds and with morphological variation.


He has been involved in Greece’s political life since the 1960s. During the turbulent years of the military junta (1967–1974), he was persecuted by the regime for his anti-dictatorial activities and ideas.
After the elections of October 1993, he was appointed as Deputy Minister of Culture by the new Panhellenic Socialist Movement (PASOK) government, serving alongside the late Melina Merkouri who was Minister of Culture. He was appointed to Merkouri’s position when she died in 1994, a position he kept until 1996.