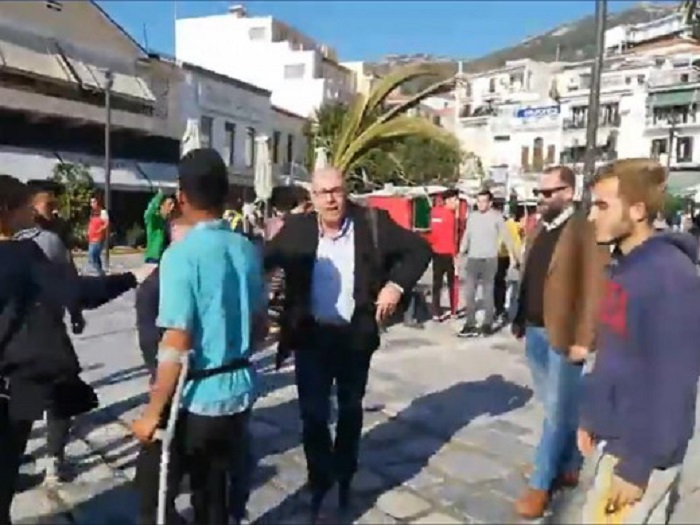 The mayor of the Greek island of Samos took the law into his own hands on Tuesday by shouting at and pushing away refugees and migrants who attempted to occupy the central square of the capital town, Vathy.
Mayor of East Samos Georgios Stantzos was captured in a video by Samos24.gr in Pythagoras Square chasing the migrants and shouting “Go the F**k Away.”
His intervention followed a police operation to disperse a demonstration on the square. Despite police having just cleared out the square, groups of migrants had returned there for another try.
Speaking to Greek Reporter, Stantzos said that he regrets using foul language but it was a knee-jerk response to an incident which could have turned very violent. “It was a human response to a very tense situation,” the mayor explained.
“It was a group of migrants, who had no specific demands, intent on occupying the square despite police prohibition… On the way to the square they vandalized at least five cars,” Stantzos added.

The mayor stressed that his action was not racist. “Myself and the vast majority of the people of Samos have no problem with the migrants… Of course, there are a few among them who are intent on creating trouble. My issue is with them alone.”
The migrant camp near Vathy, where applications are vetted for people seeking asylum in the European Union, was built for 650 people but has a current population of around 8,500, says the mayor.
“It’s a question of numbers, Stantzos told Greek Reporter. No local authority in any eastern Aegean island can cope with the doubling of the islands population… Inevitably, the migrant problem becomes an issue of human rights, as most live in dreadful conditions in summer tents, and also a law and order issue as severe delinquency problems arise.”
“The Greek government must take urgent steps to de-congest Samos and the other islands,” he said in the interview with Greek Reporter.
A riot broke out in October following a huge melee between Afghan and Syrian residents of the camp, forcing police to use tear gas to disperse the crowd.