Melomakarano vs Kourabies: The Titanic Battle of the Greek Christmas Sweets 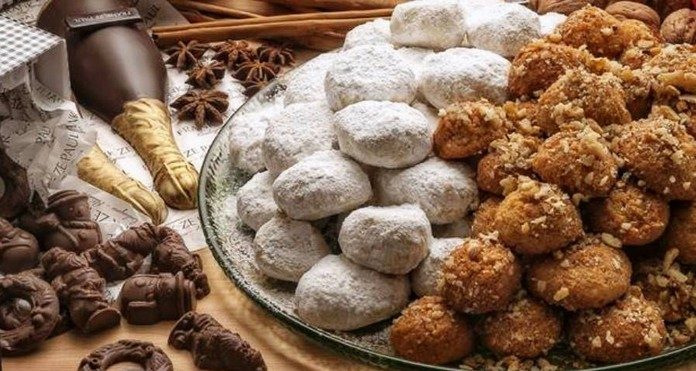 In Greece, few words spell Christmas better than “kourabies” and “melomakarono“, the two seasonal sweets that have most natives asking why they are not made all year round.
The question whether one would choose one over the other is like being asked if you prefer the Beatles or the Stones: most likely, everyone would answer “both,” since they are different, but equally delicious.
However, if one is diet-conscious, as so many of us are today, let’s take a look at how healthy each one is by looking at their differences in calories, although questions about calories are — justifiably — generally ignored during holiday seasons.
A medium-sized kourabies contains about 240 calories, and if it includes large almonds, the number of calories just goes up from there. However, nuts are an excellent health food and will certainly not harm your diet overall.
The disadvantage of kourabies, though, is the abundance of butter used, and therefore its high content of saturated (bad) fats. As for the powdered sugar, you can just shake the kourabies to get rid of the excess sugar to avoid the extra calories, and you can feel proud of yourself for doing your bit to maintain your health.
A medium-sized melomakarono contains about 220 calories and is a relatively healthier choice when prepared with olive oil, which is a source of monounsaturated (good) fats. The cookie’s honey and walnuts have many nutrients and are thus beneficial to our health in many ways.
Therefore, if you are health conscious, melomakarona are a healthier choice. Look out, though, for melomakarona made with saturated fats and sugar syrup instead of honey. As for those that are enrobed in chocolate, they are much less likely to contain honey and definitely have more calories.
Overall, the fat and sugar content of the two traditional Christmas sweets leads to both having about the same calories, but the melomakarono – if made properly – is definitely a healthier delicacy.
What is certain is that both offer the same satisfation to the palate. And if you worry about calories alone, just cut out some of the other Christmas foods and you’ll be all set.
The ancient roots of the two Christmas sweets
Dimitris Stathakopoulos, a professor of historical sociology at Panteion University in Athens, has gathered data and determined the exact etymological roots of the two words.
“Qurabiya” in Azeri, “Kurabiye” in Turkish and “kourabies” in Greek come from the word “Kuru,” which literally means dry, and “biye,” which translates to biscuit, so essentially kourabies (or kourabiedes in plural) is a type of dry biscuit.
The word biscuit first appeared in the Middle Ages, deriving from the Latin “biscuit,” which means baked twice, the method that dried out the baked goods and prevented them from going bad. In Greek the same method was described with the word “dipyron.”
The Latin “biscuit” spread by Venetian merchants to Asia, where it was established as biya/biye and connected to kuru (dry), creating two new Oriental words for biscuit: “Qurabiya” and “Kurabiye.” The two words were later reintroduced to the West, giving the hellenized word “kourabies.”
As for melomakarono (plural: melomakarona), this word comes directly from Ancient Greece. Dictionaries note that the word “macaroni” (meaning pasta”) derives from the medieval Greek word “makaronia” (a funeral food containing pasta which commemorated the dead).
The term makaronia correspondingly comes from the ancient Greek word “makaria,” which used to be a piece of bread in the shape of the modern-day melomakarono, which was offered to people who attended a funeral.
Later, the makaria recipe was changed, adding honey (“meli”); therefore the name changed as well to melomakarono. The Latins and later the Italians spelled the word makaronia as “maccarone,” which eventually came to mean pasta.