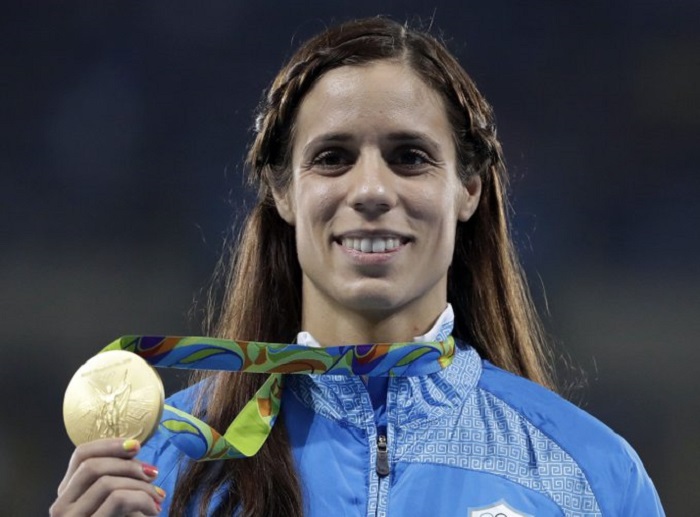 Greece’s recent Olympic gold medalist in the pole vault Katerina Stefanidi was confirmed on Thursday as an official candidate for membership in the International Olympic Committee (IOC) Athletes’ Commission. The election will be held during the Tokyo Olympic Games next summer.
The Greek athlete’s candidacy was approved by the IOC Executive Board in a meeting held in Lausanne, Switzerland following a thorough examination of all candidates submitted by their national Olympic committees.
The election of four new members to the IOC Athletes’ Commission will take place during the Tokyo Olympic Games of 2020, with all the participating athletes having the right to vote.
The new members of the Commission will serve an eight-year term, up to the Los Angeles Olympic Games in 2028. What’s more, after their election, the elected candidates will be proposed to the IOC Executive Board and IOC Session to become full IOC members.
The decision by the IOC Executive Board was received by Stefanidi with great joy. “I am really excited to be part of such a great group of athletes running for the IOC Athletes’ Commission, for the chance to represent and fight for the rights of Olympians and future Olympians…
“My hope right now is that more athletes than ever before will vote for who they believe will represent them best. We are seeing an unprecedented effort by Olympic athletes all over the world to protect and fight for their rights,” Stefanidi noted.
Spyros Capralos, an IOC Member and president of the Hellenic Olympic Committee which has proposed Stefanidi, said “Not only myself, but also all the people in the sports community in Greece, are delighted that Katerina Stefanidi is candidate for the IOC Athletes’ Commission. Katerina is not only a great sportswoman, but she has an excellent personality, too. Multifaceted, generous, kind, but also a fighter: a perfect candidate for the IOC Athletes’ Commission.”
Stefanidi was born on February 4, 1990 and has taken part in the Olympic Games of 2012 and 2016. Her most important achievement was in Rio de Janeiro in 2016, where she struck gold, with a jump at 4.85 m (15.91 feet). Her record is 4.91 m in outdoor track & field and 4.90 m 16 feet, 15/16 inches) indoors.
She was world champion in London in 2017, while in 2019 she won the bronze medal at the World Track and Field Championships in Doha. Moreover, she was European champion in 2016 in Amsterdam and in 2018 in Berlin. She was also European champion in the indoor track and field championships in 2017 in Belgrade, while she came in third at the world indoor track and field championships in Birmingham in 2018.