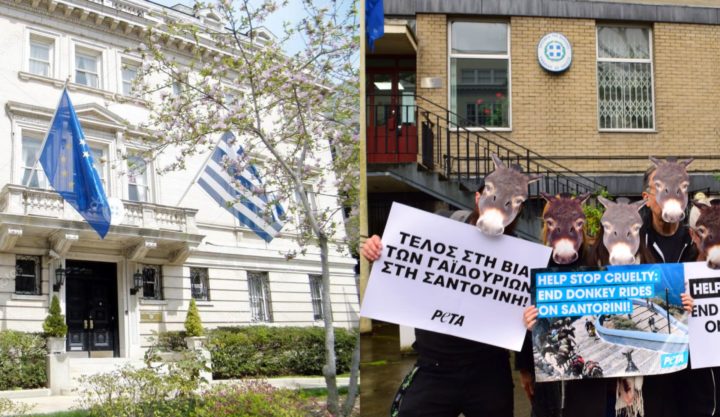 On Tuesday, November 26, a herd of injured “donkeys” in bandages and slings will “collapse” in front of the Embassy of Greece in Washington, DC, to call for an end to the island of Santorini’s notoriously inhumane donkey rides.

This new protest, organized by PETA, follows the release earlier this month of new footage revealing that some animals are still being beaten and forced to give rides without food or water, according to the American animals’ rights group.

Investigators of the organization on Santorini claim that they found donkeys and mules suffering from open sores, raw skin, and bloody injuries from ill-fitting and makeshift saddles.

PETA also claims that the animals are often hit with a stick by a handler while being forced to carry tourists up and down more than 500 slippery steps.

When they are not being forced to give rides, most of the animals are tethered in the scorching sun so tightly that they can’t even reach the one bucket of water available to them, the animals’ rights organization suggests in its publicity.

“Donkey abuse on this tourist island is a disgrace to Greece,” says PETA President Ingrid Newkirk.

“Pregnant, lame, exhausted animals struggle to carry people up hundreds of stone steps all day long as if they were machines, not flesh and blood,” she adds.

Of course, both the people who use donkeys to offer this controversial service to tourists and local authorities on Santorini have repeatedly denied these allegations.

National authorities have introduced strict criteria under which one can use donkeys for work, and the local police often conduct checks to see if everyone is complying with them.

The protest is the second of several that PETA and its international affiliates are planning to hold at Greek embassies around the world.