GRNews
GreekReporter.comGreek NewsCyprusProspects of a New Round of Cyprus Talks Still Alive After Informal... 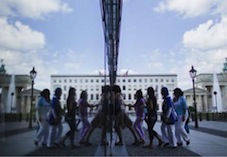 Following a crucial informal dinner on Monday in Berlin with the leaders of the two major communities of Cyprus, hopes for a new round of proper, formal talks still remain still alive.
Secretary-General of the United Nations Antonio Guterres invited President of Cyprus Nicos Anastasiades and the Turkish Cypriot leader Mustafa Akinci to the German capital to discuss the prospects for holding another round of the negotiations which did not succeed in 2017.
However, it is clear after the dinner that these negotiations cannot resume immediately for a score of reasons.
The current unwillingness of Turkey to fully engage in a new round of negotiations, and the UK’s uncertainty over Brexit, along with the Turkish Cypriot elections of April, 2020 are some of the major reasons why a new round of talks could not begin before May of 2020.
However, until that time, the UN will attempt to keep the spirit of negotiations alive, beginning with an effort to convene an informal quintet, with the participation of the Greek and Turkish communities of the island, along with Greece, Turkey, and the UK.
A meeting of this informal group could serve as the prelude to the formal negotiations which are intended to begin in 2020.