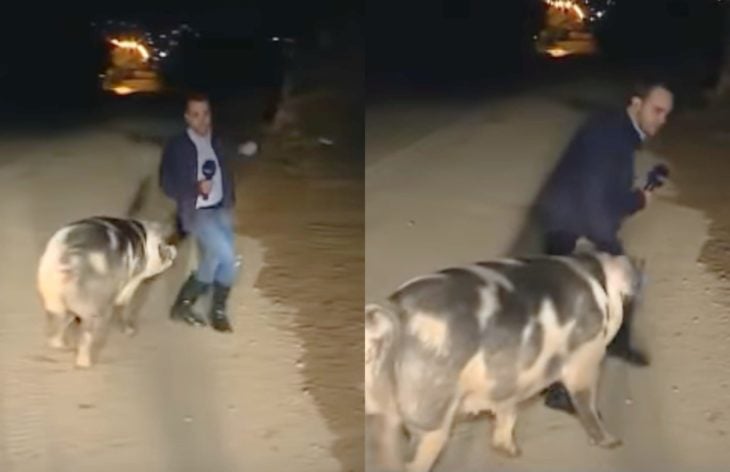 A bizarre yet hilarious incident took place on Tuesday morning on live television at the ”Kalimera Ellada” (”Good Morning Greece”) show on the ANT1 television network.
When the hosts of the show tried to begin their live interview from Kineta, the town in Attica where massive floods have caused widespread damage, the show’s reporter Lazos Mantikos did not appear in front of the camera.
A few seconds later the camera operator caught sight of him — but he was not interviewing any of the local officials, or giving updates on the serious damage caused by the storms. He was being chased by a pig.
As soon as the reporter appeared onscreen, he began running around the camera, since a pig that obviously had escaped from a nearby farm was chasing Mantikos in earnest.
The unfortunate reporter was only trying to stand still to inform the public about the Kineta floodings, and he made several valiant attempts to do so; but in the end this proved impossible.
The pig constantly harassed and jostled the unfortunate reporter, even biting him, making the journalist apologize for the awkward scene.
”George, can you hear me? We have an issue here; there is a pig that’s been chasing us since this morning,” Mantikos told the presenter of the show, George Papadakis.
The hosts of the popular TV morning show attempted to remain serious and solemn since they were talking about extensive damage the severe weather had caused in many parts of the country. But they couldn’t help but laugh, as the live footage was simply hilarious.
The live feed from Kineta finally stopped, since it was obvious that the unfortunate journalist simply could not even try to deliver his report any longer.
We certainly hope that both the reporter and the animal are doing fine after their melee this morning!