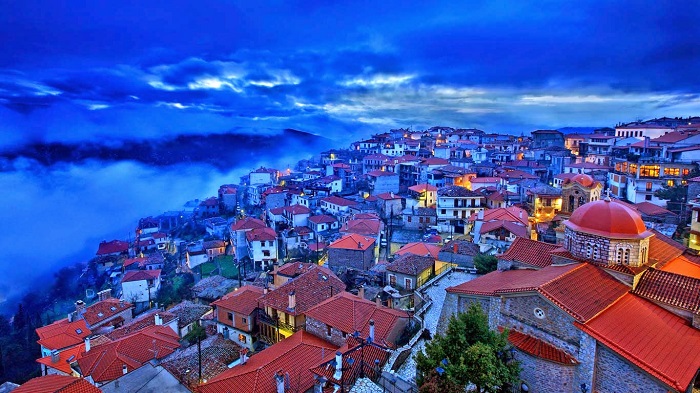 If you are one of those who believe that all Greece has to offer is beautiful sandy beaches and crystal-clear salt water under the hot Mediterranean sun, that could only mean that you have never been in the country during wintertime.
Because if you have, then you definitely know the beautiful town of Arachova, Greece’s ideal winter destination.
The cosmopolitan alpine-like town of Arachova is the number one place to go to ”see and be seen,” as thousands of people, Greeks, and foreign tourists visit it every year.
Built on the slopes of the legendary Mount Parnassus, at an altitude of 950 meters (3116 feet) above sea level, Arachova is the most well-known winter destination in central and southern Greece, loved especially by Athenians.
If you’re an experienced skier, Parnassus is basically heaven on Earth, but if you’re an amateur, the ski resort next to the town has coaching schools where you can start practicing sliding on snow and standing up on your feet before you conquer Greece’s mountain slopes.
Only a two hours drive away from the Greek capital, this cosmopolitan hub is a meeting point for Greek and foreign visitors alike during the winter season.

One can enjoy the town’s hidden treasures at almost every corner.
The weather conditions are usually cold and rainy in this mountainous area of Greece, so prepare yourself for loads of snow and bundle up before you go there.
Of course, you can always find a safe refuge and an array of warming drinks in the town’s many bars clubs and after-clubs, which are usually full of young people dancing and enjoying themselves most days of the week.
However, it’s not just the town itself that you absolutely must visit.
Only 10 kilometers (6 miles) away lies one of the most important archaeological sites in the entire world. The stunningly-beautiful Delphi, a designated UNESCO World Heritage Site, was the ancient seat of Pythia, the oracle who was consulted about important decisions throughout the ancient classical world.
The panoramic views of unspoiled mountaintops seen from Delphi, which serve as a backdrop to its priceless sculptures and buildings, constitute what must be among the most beautiful sights anywhere in the world.
Additionally, all of those interested in history should pay homage at the nearby village of Distomo, the home of the Mausoleum of Nazi victims from World War II. This particular area suffered greatly from massacres and other crimes under the years of Nazi occupation.
About 30 kilometers away from there is the spectacular monastery of Saint Luke, one of the most important Byzantine architectural sites to be found anywhere in the country.
So what are you waiting for? Pack a suitcase and off you go to this world-class destination; Arachova and its many nearby sites are there, just waiting for you to explore!