GRNews
GreekReporter.comGreeceAmerican B-52 Bomber Lands in Greece For the First Time

American B-52 Bomber Lands in Greece For the First Time 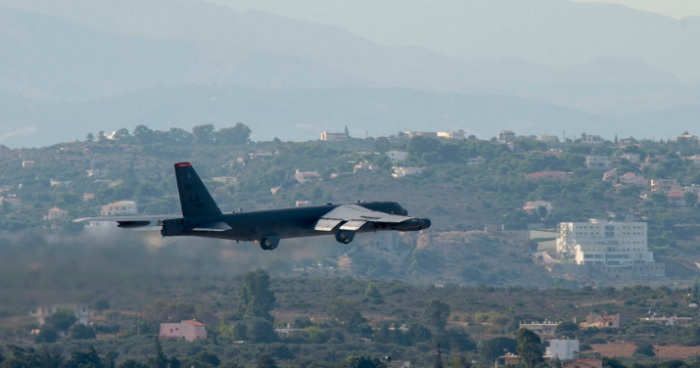 The U.S. Air Force has deployed its B-52 Stratofortress bomber to Greece for the first time, according to a new statement issued by Naval Support Activity Souda Bay.
“A B-52 Stratofortress bomber was diverted to land at Naval Support Activity Souda Bay due to adverse weather at its destination – marking the first time a B-52 landed here,” the service message states.

Check out these photos of our unexpected, but welcome, visitor this week!

A #B-52 #Stratofortress bomber was diverted to land @NSA_SoudaBay due to adverse weather at its destination – marking the first time a B-52 landed here.@USEmbassyAthens @HQUSAFEPA pic.twitter.com/1V0OymH9xB

Naval Support Activity Souda Bay is a major naval base of the Hellenic Navy and NATO at Souda Bay on the Greek island of Crete.
It serves as the second largest naval base of the Hellenic Navy in numbers of battleships docked there, and is the largest and most prominent naval base for the United States and NATO in the eastern Mediterranean Sea.
Additionally, it features the only deepwater port in Southern Europe and the Mediterranean Sea which is suitable and capable of maintaining the largest aircraft carriers, dubbed “supercarriers”.
The only other options available for the US Navy for maintaining that type of vessel are bases at Norfolk Naval Station in the United States and Dubai in the Persian Gulf.