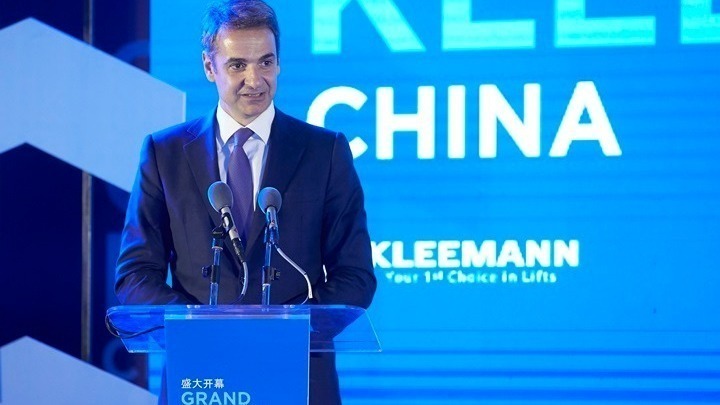 Greek Prime Minister Kyriakos Mitsotakis visited the headquarters of the Chinese shipping giant Cosco in Shanghai on Monday, where he declared that their common goal “is to make Piraeus Port the largest port in Europe.”
Mitsotakis, who was accompanied by Cosco President Xu Lirong, was warmly greeted by Cosco employees who chanted slogans and held Greek and Chinese flags.


The Chinese official praised the Greek premier for the quick approval of Cosco’s new investment plan, which — as he stressed — is a milestone for future cooperation between the two countries.
“Today Piraeus is the largest port in the Mediterranean and among the ten largest in the world,” the president of the Chinese colossus said in his address to the assembled throng.
For his part, Mitsotakis noted that Cosco had taken over a subpar port and made it the largest in the Mediterranean, creating at least 3,000 new jobs in the process.
The Greek PM emphasized that this investment had “materialized during a deep financial crisis” and added: “Your company and China believed and invested in my home country when many considered investment prospects to be non-existent.”
“I attach great importance to new infrastructure, new hotels and the development of Piraeus that will make it a world-class hub for cruising,” Mitsotakis added. He also welcomed the Chinese interest in shipbuilding, noting that it is important to support domestic business activity in Perama.
Earlier on Monday, speaking at a Greek-Chinese business forum in Shanghai before more than sixty Greek businessmen and dozens of their Chinese counterparts, the Greek PM invited businessmen to place their trust in Greece, stressing that “now is the right time.”
“We are a government fully committed to implementing the necessary changes that will ‘unlock’ the real potential of this country, while you have all those features that can make Greece a real success story,” he added.
PM Mitsotakis also referred to the negative borrowing rates Greece enjoyed just a few days ago, which — as he correctly pointed out — was unthinkable until recently.