GRNews
GreekReporter.comEuropeEliud Kipchoge Becomes First Human to Run the Marathon in Under Two... 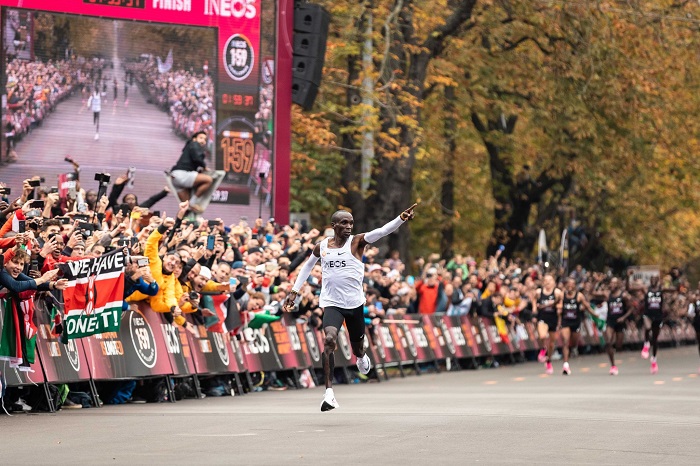 World record holder Eliud Kipchoge made history on Saturday by becoming the first human being to run a marathon in under two hours.

The Kenyan Olympic marathon champion and world record holder completed a course around Vienna’s Prater Park in one hour, 59 minutes and 40 seconds on a cool, misty and windless autumn morning.

Today we went to the Moon and came back to earth! I am at a loss for words for all the support I have received from all over the world.

Thank you to all who gave me the opportunity. Asante. pic.twitter.com/0HTVBjB6YY

Kipchoge was supported by 36 runners who served as pace setters, accompanying him in alternating groups, one of the reasons why the International Association of Athletics Federations (IAAF) will not recognize his time as a world record.

Running at a consistent average pace of 2:50 minutes per kilometer (4:33.5 minutes per mile), Kipchoge was 11 seconds ahead of schedule just halfway through his run.

The pace setters left him to run at his own pace for the final 500 meters, and Kipchoge punched his chest twice in celebration at the finish line.